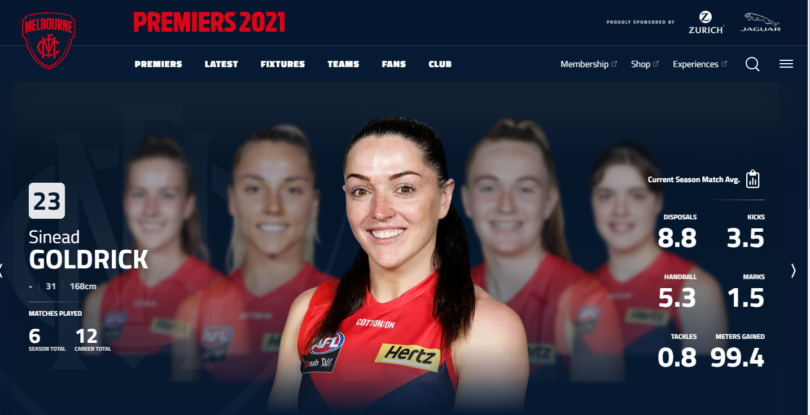 From the official website of the Melbourne Football Club.

Melbourne, AUSTRALIA – Despite injuries that sidelined her for almost half the season this year, Irish athlete Sinead Goldrick is heading back to Australia to continue her career in 2022 with the Melbourne Demons.

A star player with the team here, Goldrick also plays with the Dublin Ladies Gaelic Football team back home in Ireland. That team won the All-Ireland final – the equivalent of the Grand Final in most other leagues – in 2020, their fourth in a row.

Goldrick, who went through a lot to play in the Australian Football League Women’s this year – took time recently to speak with Youth Journalism International about the difficulties of 2021.

Excited to be coming back to play for the Demons, Goldrick and two Dublin teammates who also played for the Demons in 2021 flew into Brisbane. The three – Goldrick, Lauren Magee and Niamh McEvoy – had to spend two weeks in hotel quarantine because of the strict border controls that are currently in place because of the pandemic. Having company in quarantine helped, she said, and made the process less lonely.

After they had a few days to relax, the trio spent some of the time in quarantine on a strength and conditioning program that the Demons gave them.

With quarantine completed, they flew to Melbourne for one training session before the Demons’ opening round match against the Gold Coast Suns of Queensland.

It wasn’t long before Goldrick was cruelly cut down by injury.

Only weeks into the season, Goldrick suffered a concussion. Because of the league’s protocols she had to miss the following match.

She was frustrated, she said, originally thinking she hadn’t had one. She felt like was playing really well in that match and her role was finally starting to click. Despite this, she knew that she had to trust what the doctors were telling her.

Goldrick was able to return after only a week on the sidelines, but was out again the following week with what was described publicly as hamstring pain. Fortunately for Goldrick it was all just precautionary and the injury wasn’t too serious, but it was another setback.

After that hiccup, Goldrick returned for two more matches before suffering another hamstring injury, this one more serious. In the match in Perth, fans could see the visible distress on her face as trainers helped her off the ground.

Away from the crowd, those tending to Goldrick’s injury asked her to do some physical tests. She couldn’t, and briefly burst into tears, she said.

Despite the personal disappointment, she emerged and cheered on her teammates, who won the match and secured their place in the finals.

Goldrick said she could tell her injury was serious, but she didn’t know the extent until she returned to Melbourne and saw the scans.

Her season was over.

Throughout the remainder of the season, Goldrick said she tried to stay positive. She learned from teammates Shae Sloane and Krstel Petrevski, who were also recovering from long-term injuries, about their attitudes toward recovery.

Once she had a clearer plan on her recovery and return to play, she was in a more positive headspace to support those around her, she said.

“It’s not about you so you just have to remove yourself and help in any way you can and that’s the most important thing.”

Goldrick was grateful to have a “recovery buddy” in Petrevski, who also had a serious hamstring injury earlier in the season.

With a long rehab, it can be easy to lose motivation, but Goldrick had strategies to stay resilient and motivated.

Each week she wrote down a plan of what her milestones were, which she said motivated her.

She had to have two more surgeries after her initial surgery, which she said was tough because she had set out the recovery plan, so she had to reset and replan those goals.

One thing she learned, Goldrick said, was that she could write down her goals, but she still had to be adaptable.

“You have to accept those feelings of disappointment, it’s only natural,” she said, “and then once I’m in a good headspace I’m able to write a clear plan and then for me those small milestones are really, really important and then they keep me motivated.”

She intended to do her whole rehab in Australia. The idea was for her to be fully fit before she returned to Ireland, but after the two further surgeries, she went home.

Back in Dublin, she saw her Dublin teammates go on to win the National Football League title.

Next came the championship season, where Goldrick sat on the bench for the first four games but never got to play. She explained that because of covid, she had to be listed on the team, even when she wasn’t fully fit to play.

Then came the knockout stage of the championship season. Dublin topped their group after going undefeated and went on to beat Donegal in the quarter final.

The semi-final against Mayo then rolls around, and in the second half Goldrick finally makes it out onto the pitch.

In hindsight, Goldrick said, it was a good achievement just to make it out onto the pitch and play, but she had loftier expectations for herself. She wanted to be a part of the starting side.

She got her wish when the coach put Goldrick in the starting side for the All-Ireland final the following fortnight.

Though Dublin didn’t win, being on the team for the All-Ireland final after a rough year and long recovery means things are looking up for Goldrick heading into 2022 and beyond.