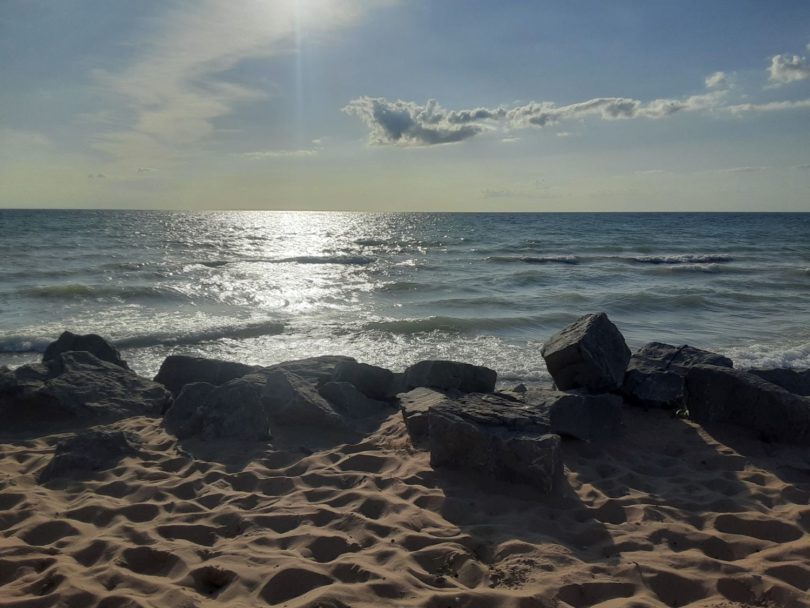 Lake Ann, Michigan, U.S.A. – Driving northwest from my home in Ann Arbor to Lake Ann, Michigan, I watched the scenery become progressively more wooded and desolate. While I was used to farmlands and wide, open fields as rural landscapes, the land here is filled with tall birch trees and pines.

My family was driving to Lake Ann, population 268, for two weeks. Anyone who grew up or lives in Michigan knows what to do when anyone asks where you live. You hold up the back of your hand (roughly the shape of Michigan) and point. I live near the right side of the wrist. Lake Ann is at the tip of the little finger.

In Michigan, you can start at the bottom, drive north for 13 hours and still be in Michigan. The state is roughly divided into two parts and “going up North” typically means going to the more rural, countryside part.

I had never fully understood the excitement about Northern Michigan. Sure, it’s pretty if you like camping and being outside for long periods of time, but it never seemed so special to me that you would go year after year, generation after generation as some of my friends do.

But in Lake Ann, I discovered the beauties of Northern Michigan.  Note: Lake Ann is not in the Upper Peninsula of Michigan which some may consider North. But it’s much more Northern than where I live and has the more rural characteristics that the UP has.

While in Lake Ann, I walked in the woods and photographed mushrooms, hiked the Sleeping Bear Dunes and swam in vast Lake Michigan. It was a type of nature I certainly don’t have in Southern Michigan. My family kept on saying to each other that we couldn’t believe we were still in-state.

The legend of the dunes comes from the Chippewa people. It tells of a mother bear and her two cubs who lived in the land that is now Wisconsin and were forced to cross Lake Michigan when faced with a drought. While swimming, they encountered a storm and the cubs drowned.

The story goes that the mother bear was brought to the spirit world where she was happily reunited with her cubs. The bodies of the two cubs became the North Manitou and South Manitou Islands and their mother’s body was covered by sand to become the dunes. Some may think of the story as really sad, but I’ve always loved the beauty and strength it conveys.

I also spent time in the center of Lake Ann. My family discovered The Breadlady, a micro-bakery with amazing focaccia and jams, and The Corner Cone, an ice-cream shop we went to almost every night.

Now I feel a little silly for looking at others’ excitement about Northern Michigan with skepticism.

Living in the United States, you can become really attached to your state, almost feeling like it is your home country. I’ve always identified as a “Michigander” and am excited to carry that with me when I move out of state.

I love all of the lakes and the changing seasons and the inside jokes about potholes. But it wasn’t until this summer that I discovered I know only a small slice of my home state.

Michigan contains a range of landscapes and towns and I’m so grateful I got to discover more of it this summer.

Lucy Tobier is a Senior Reporter with Youth Journalism International.