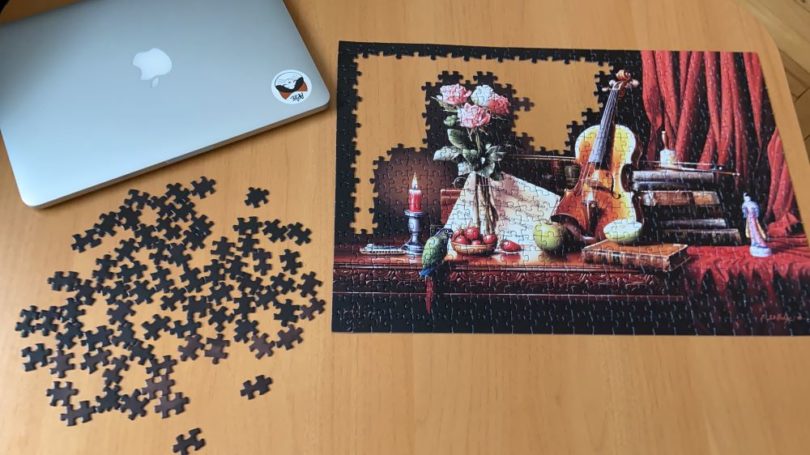 Regardless of where they are on the globe, teenagers are dealing with the ongoing problems of the coronavirus pandemic in unique and creative ways, from cooking and exercising to social media and everything in between.

As teenagers stopped going to schools, gyms, cinemas, and meeting with friends, they were deprived of doing the simplest of things, like shaking someone’s hand or socializing.

“I stress bake,” said Sophie King, 15, of McLean, Virginia, who said she also re-did her room, moving all the furniture and painting everything.

“I’ve been knitting a scarf,” said Aliyah Kassam, 17, of Stanmore, England. Kassam said she has also been trying to use this time to “get back into the rut of things” especially practicing the violin and the guitar.

She finds art soothing, Kassam said. “When I am feeling down, I paint.”

Reem Fayed, 16, of Mechanicsville, Virginia, described herself as an artsy person.

She said sometimes she’ll paint, but has recently started making bracelets. She said she might decide to give them out as gifts when quarantine is over.

Blessy Josephin, 15, of Chantilly, Virginia, said it’s important not to be on the computer all day. She said she cooks and tries “not to burn down the kitchen.”

Anna May, of High Wycombe in England, said it is hard to let stresses go if you don’t get them out of your system. Sometimes, she said, she puts on some music, opens a window and dances or stretches.

May, who is 23, said she’s recently learned a lot about self-compassion and is finding it helpful for coping when things are rough.

Pegah Moradi, 18, of Stockholm, said she and her family stick together, which makes her feel she can face the virus.

Sixteen-year-old Karolyn Morris of Suffolk, Virginia, has a simple way to feel better.

Crying and letting it all out – something she did even before the quarantine – helps her realize that whatever she’s upset about is not such a big deal, Morris said.

According to Chambie Elliot, a teen in Spring, Texas, people with mental health issues might want to consider pausing to take a deep breath. Let yourself know that you are alive, she said, and you can be thankful for that.

It’s important to realize we aren’t the ones dictating the circumstances, said Elliot, 15, who said she reads the Bible to maintain her self-control.

In Quito, Ecuador, 17-year-old Juan Esteban Riofrío said being with his family and helping out in the household is taking up his time in quarantine, along with cooking, exercising, watching movies and playing games.

Teenagers are adjusting to the pandemic lifestyle and trying to cope with it.

Besides taking her dog out, Crystal Palmer of Melbourne, Australia said she has been taking her siblings to play on the football field since they’ve all been getting restless in the house.

When schools, buildings, and communities closed temporarily across the world, students of all ages found different ways to stay engaged and cope with a new way of life – almost completely online.

The element of in-person communication, human touch, and simple human greetings has nearly all been transformed into emojis and virtual connections.

In Beijing, Li Zing Yi, 15, likes to video chat with her friends and play computer games.

Everyone’s daily routine has completely changed, no matter where they live in the world.

For many, the long weeks and months of the pandemic generated both positive and negative emotions that differ from teen to teen based on their lifestyles and how they spend their time during confinement.

Maggie Wang, a 15-year-old high school junior in Northport, New York, said she would stress eat or talk to people.

But Sarai Deese, 16, of Charlotte, North Carolina, said when she is panicked, she eats only one meal a day or even less. During the pandemic, she is trying to make sure she gets the nutrition she needs by focusing on eating something three times a day and meditating at night after working out.

As important aspects of people’s lives turned upside down all over the world, overnight and at an uncontrollable rate, some teens struggled with mental health issues while others’ outlooks remained positive.

Some turn to books, including Pegah Moradi, 18, of Stockholm; Jomel Goh, 18, of Singapore and 17-year-old Nicolle DeGroft of Suffolk, Virginia.

DeGroft said she also writes poetry but found herself sleeping a lot because she felt sad.

Vedat Burak Sanel, 17, of Istanbul said that he copes with quarantine by talking to friends and entertaining himself by listening to music and watching videos and documentaries.

Some young people used time in quarantine to get caught up on their academic work or even take on a new course of study.

“I’m mostly busy studying, keeping up with my classes, and preparing for the tests that we might have after this quarantine,” said Dhekra Abbessi, 19, of Soussa, Tunisia.

In Fez, Morocco, 16-year-old Zineb El Janati said she has been trying to improve her English during quarantine.

“I don’t have much time to get anxious because of all the studying,” said Sevgi Eda Keskin, 18 of Istanbul.

Though Keskin said talking with friends or relatives is helpful, she doesn’t have a lot of ways of keeping herself engaged.

“We’re trapped, me, myself and I,” said Keskin.

For young adults, mental health problems range from short-term to long-term, including headaches, anxiety, depression and stress, as well as more serious traumas such as post-traumatic stress syndrome.

Becca McDonald, 19, of Liverpool, England, said she takes time to write, but also makes use of online counseling services when she needs them.

A person’s age, family support, temperament and lifestyle can all impact on a person’s mental health during this pandemic. Though many are locked up at home for the moment, pandemic experiences can be highly individual.

For El Janati in Morocco, coping with mental stress is different than someone of the same age in Australia.

El Janati said one of her favorite ways to cope with the pandemic is by sleeping. Even if it doesn’t completely stop the challenges to her mental state, it does give her peace of mind and valuable rest.

On the other side of the world, Chloe Connell, 15, from Melbourne, Australia said she listens to music, does her makeup, motivates herself to feel her best, and tells herself that it is okay not to be okay.

Some keep an exercise routine

Mental health is not the only thing that has been affected by long confinement. The repercussions touch physical health, too.

Despite gyms closing and the difficulty of playing sports in teams, many teens are still finding ways to maintain an exercise regimen to retain some sense of normalcy.

In Tehran, Iran, 18-year-old Maryam Azimpour said she tried to exercise when she was bored. As soon as she could, she began jogging in places that weren’t crowded.

Shriya Mohanty, a student at the Institute of Technical Education and Research in Bhubaneswar, India, said she tried to adopt a healthy lifestyle by building a daily routine and exercising to keep physically fit.

The world is still unsure when covid-19 will end. Though there are different ways of responding to this calamity, it may help youth to remember that no matter where they are from or what they’re going through, there is a world full of young people going through the same thing.