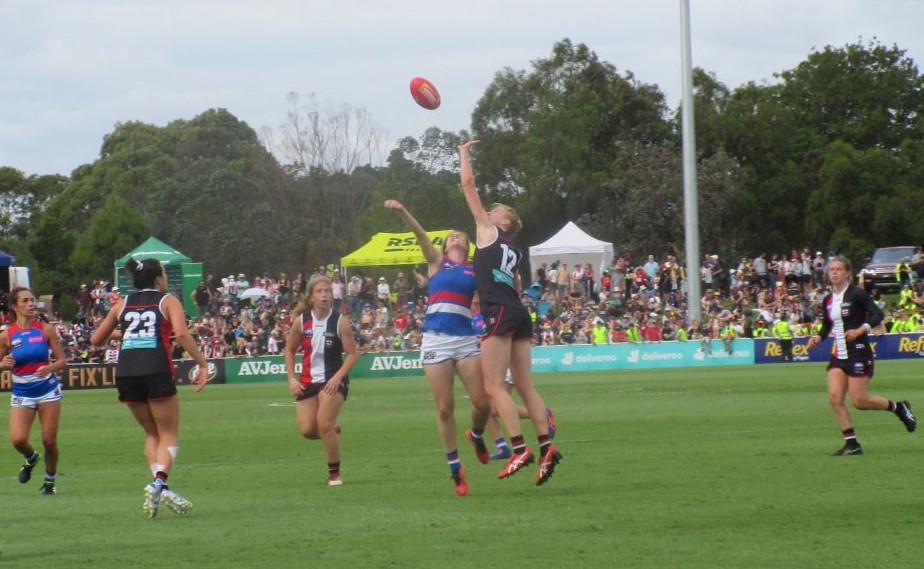 Action from the round one match of 2020 AFLW season between the St Kilda Saints and the Western Bulldogs. (Alyce Collett/YJI)

MELBOURNE – Like many countries around the world, Australia’s sporting leagues have ground to a halt because of the global pandemic.

In March, the Australian Football League postponed its men’s season and cancelled its women’s season, even though there were still over a month left to go in the women’s season.

In the week following, chaos ensued.

Officials announced that the final two rounds of the home and away season were going to be scrapped, and that the season was going to progress straight to finals. But it was unclear how the finals structure was going to look.

The competition is divided into two conferences to make the season fit into a specific timeframe in the sporting calendar, so the main question was, how many teams from each conference would make the finals?

There were conflicting media reports that suggested that anywhere from the top one to four teams on each conference’s ladder were going to make it to the finals, which left players and fans on an emotional rollercoaster.

Sigrid Avery, a 28-year-old women’s fan, was frustrated about the way that the season was changed.

“It felt it was done in an instant, overnight almost. No contemplation like AFL got, just a straight cut. It felt like there was contingencies in place so these women got the raw end of the deal.”

These kinds of changes to the season have less of an impact on the male athletes, who get to play football as their full-time jobs, then it does on the women players.

The Australian women players are only part-time professional footballers, with many players having to also work full-time to make ends meet.

Midfielder Alicia Eva, captain of the Greater Western Sydney Giants, works as a development coach in the men’s football programs in addition to her own athletic career.

Like many of her teammates and fellow female footballers, she finds it difficult to manage full-time work with the women’s league, and only works part-time during the season.

“It is extremely taxing to juggle work 9-5 p.m. and football 5-9 p.m. Those players who do work full time have had to, at times, take leave without pay to accommodate for days off due to travel,” Eva said.

According to Eva, players learned only on the Monday prior to what should have been round seven that there could be changes to the season structure.

“Different options were put on the table and up for a vote – straight to a Grand Final; continue the season as is and see what happens; straight into finals series; stop playing immediately,” Eva said. Instead of playing against the team that was scheduled in Round 7, they were told they’d be going straight to finals.

“It was disappointing that our already very short season was cut and no premiership was awarded,” Eva said, “however the growing fear in the community would have made it … irresponsible to keep playing. The health and safety of the players, staff, and wider community is far more significant than playing football.

“In hindsight, if the majority of players wanted to see a Premier crowned, then perhaps AFLW should have progressed straight into a Grand Final/played multiple games in a weekend to achieve a result,” she said.

Eva is concerned about potential changes to the 2021 season.

“I worry that the AFLW competition will look different and rather than grow – as we hoped it would – it will be shortened or modified in some way. Conferences will stay, however I foresee the number of games we play to be lessened.”

Despite all the negatives, Eva is hopeful of the future of Australian Rules Football.

“We, as players, are realistic of the major financial hits to the AFL and its clubs – as is the case for many businesses across the world! But Australian Rules Football will survive. It is the heartbeat of many Australian communities. It may just look a little different for the next few years.”

One of the unique things about the women’s competition compared to the men is the large number of players from Ireland in the competition. These players, many from the high levels of Gaelic football, come over to play in the Australian competition and hope to be able to transfer those skills and start playing Australian Rules with relative ease.

As the season structure was getting changed, the Irish players found themselves facing the possibility of having to fly home before the end of the season.

After the Irish Taoiseach Leo Varadkar made a public broadcast asking all Irish citizens that were abroad who wanted to return to do so within the following week, the Irish players began to decide whether to return home or not. Many players did return home, but some who were rehabbing from surgery stayed in Australia.

Michael Currane, founder and head of Australian Football League Ireland Womens, which is the women’s Australian Rules competition in Ireland, noted that the time difference between Australia and Ireland did make it difficult to keep up to date with what was going on for fans living in Ireland.

“The scenario was literally changing by the hour. I was in direct contact with a good few of the Irish players at the time and they really did not know themselves what was happening from day to day,” Currane said. “There was definitely a lot of uncertainty and confusion.”

With impending budget cuts at Australian Football League Womens clubs, Currane does not expect a huge rise in the number of new Irish players signed to the league’s teams.

But he also said he doesn’t expect that the way the 2020 season ended will have a negative impact on the players from overseas heading into the future, assuming that the threat of the coronavirus has deceased and air travel will be at least approaching back to normal.

“Every one of the players, and I was in contact with most of them regularly across the season, thoroughly enjoyed the experience, despite the sudden and inconclusive finish,” Currane said. “The opportunity to play as a professional athlete is the main reason each of them relish the chance to play in AFL Womens. The concern more so at this stage would be that the clubs are in a position to take the Irish players back for season 2021 and we would be hopeful that would happen.”

As much as fan Nikki Clare from Melbourne was saddened by how the season was ended, she also acknowledges the tricky situation the men’s league was in at the time.

“From a supporter point of view I was saddened how the season ended, the girls had their season cut short, had one round of finals and players like Mel Hickey didn’t get the retirement game they deserved,” Clare said. “But, the AFL did the right thing, especially in the current social climate. Athletes are not immune to this virus. They need to be protected too and they play a physical, contact sport.” 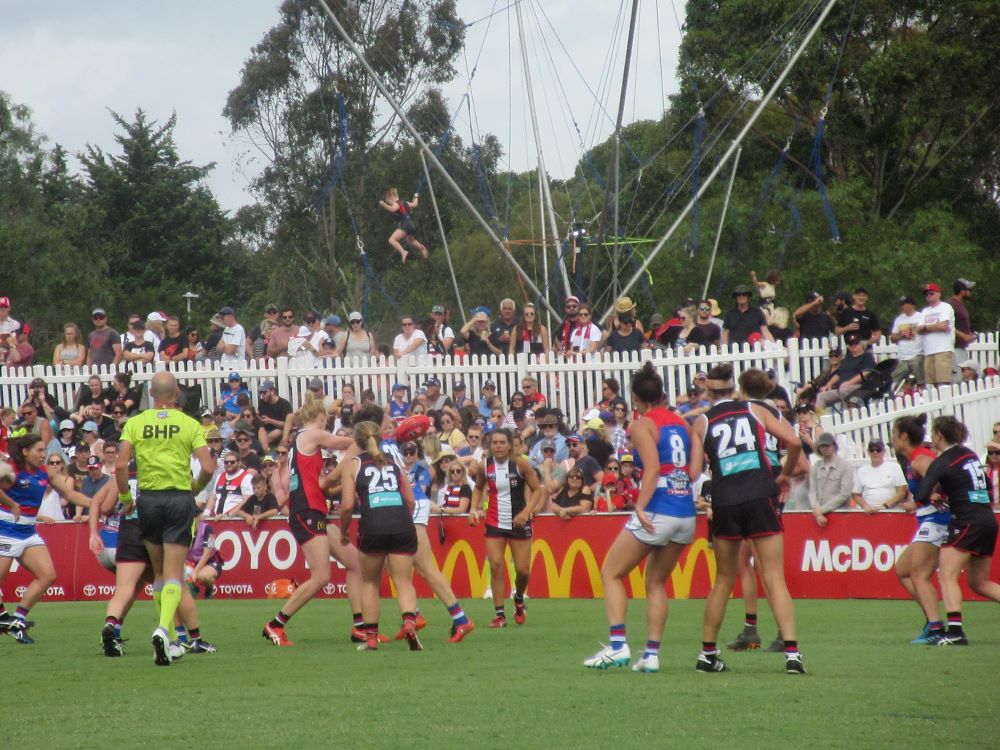 Fans watch the action from the round one match of 2020 AFLW season between the St Kilda Saints and the Western Bulldogs. (Alyce Collett/YJI)

Clare said fans need to remain positive about the women’s league and united through this time of uncertainty.

“Don’t let negative influences cloud your love of AFLW. We all need to stick together more than ever,” said Clare. “We can counteract the negative talk by talking about how important AFLW is to us.”

Even months later, the future is still uncertain. Offseason events such as delistings and trade week that normally happen within a month of the season ending still have not occurred.

In addition, state leagues that were meant to start in the past few weeks are yet to begin, and players still don’t know any details about if or when they will. Preseason for the women’s league is supposed to start in November, so hopefully for players and fans the future will become clearer by then.

No matter what happens, the women’s league will always have its passionate fans who will be there supporting the league no matter what.

“AFLW is here to stay, it isn’t going anywhere,” said fan Fearn Harrison, who lives in Melbourne. “I’ll stick with it forever, through the good and not so good times because I love it so much.”