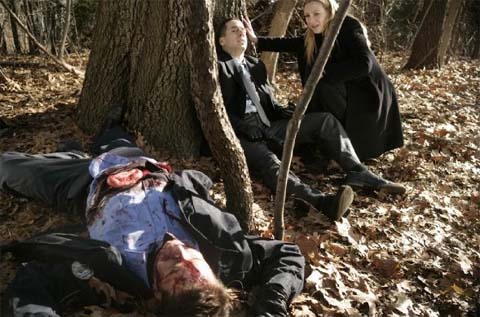 ERMELO, Gelderland, Netherlands – Science fiction comes in all shapes and sizes, some even more incomprehensible than others. Fox’s Fringe, set to return in September, is surprisingly accessible – even when you’re not big on the sci-fi genre.
In this show from J.J. Abrams, who also made Lost, the so-called Fringe Division of the FBI investigates cases that are not your everyday crimes. Each episode starts off with some sort of inexplicable event, which has usually resulted in gruesomely disfigured victims.
All these events are part of ‘The Pattern,’ a series of strange, inexplicable occurrences around the world that are almost always traced back to a powerful corporation called Massive Dynamic.
The show’s name refers to the field of fringe science, which includes things like psychokinesis, teleportation and genetic mutation.
To find answers, the head of the Fringe Division, the authoritative Phillip Broyles (Lance Reddick), asks FBI agent Olivia Dunham (Anna Torv) to join his taskforce. She teams up with Walter Bishop (John Noble), a brilliant but insane scientist who has been in a mental institution for 17 years, and his snarky son Peter (Joshua Jackson).
While Olivia, often accompanied by Peter, is chasing down suspects, Walter is in his old lab at Harvard University to find explanations. He’s assisted by witty FBI agent Astrid, who’s also there to keep an eye on him.
Due to his past scientific research, Walter knows a lot about the things they come across, but unfortunately he has forgotten a lot about it.
The show is a mystery, with each episode containing clues that will be used in following episodes or the bigger story. However, these clues are very easy to miss, so luckily it’s not difficult to follow the story without solving the riddles.
Visual effects are absolutely essential for a show dealing with alternative realities and genetically altered monsters. The effects in Fringe are stunning, and the depiction of people with strange disfigurements or liquefied brains is often downright gross.
The constant sense of suspense and mystery certainly contributes to making Fringe a great show, but what makes it really attractive is the interaction between the main characters.
With Olivia’s determination, Walter’s ingenious ramblings and inappropriate remarks, Peter’s sarcasm and Astrid’s funny perspective on things, they make a good team that balances the feeling of urgency to save the world with a great sense of humor.
At first sight, Olivia seems very much the stereotype of an FBI agent, who – like the majority of female FBI-characters on TV – has a troubled childhood.
She’s slightly detached and has an almost obsessive commitment to her job, but Anna Torv’s subtle acting makes Olivia anything but cold and emotionless. With just one eye-movement or a quick remark, she manages to show Olivia’s more emotional and caring side.
Peter’s the genius with a shady past, who is the only one who can really understand his father, despite his difficult relationship with him.
From the first episode, there’s definitely a spark between Peter and Olivia, but they’re taking things slowly. Painstakingly slowly. Though that’s likely to be a source of frustration for many fans, it’s probably for the best. The pair having a relationship too soon would probably ruin it, especially since they’re great as friends.
Walter is a brilliant character as well, with John Noble doing a fantastic job portraying him as a genius living completely in his own world and just saying whatever comes to his mind.
Of course the stories on Fringe are bizarre and far-fetched – it’s still science fiction – but thanks to the show’s great characters and intriguing plot, you don’t have to be a hardcore sci-fi fan to enjoy it.