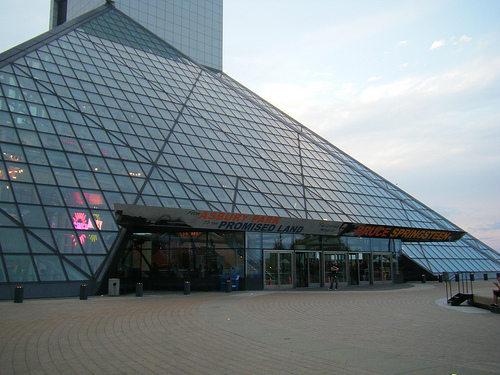 Rock and Roll Hall of Fame in Cleveland, Ohio (YJI)

CLEVELAND, Ohio, U.S.A. – Did you know that the Rock and Roll Hall of Fame has a double-story escalator? It also has the ashes of Alan Freed, a famous radio disc jockey, in an urn shaped like a tombstone. There’s a giant hot dog sculpture in the lobby, hanging from the ceiling, too.

Besides the massive hot dog, one of the most interesting things there is a special temporary exhibit on Bruce Springsteen.

Born September 23rd, 1949, Springsteen has been playing rock and roll professionally for over 45 years. The exhibit includes many of his personal items, like a round wooden table that he wrote songs on.

The museum also had the original copies of some of his song lyrics, including “Pink Cadillac,” written in 1984. The exhibit featured eight of Springsteen’s guitars.

One of the guitars, used in his “Devils and Dust” tour, was painted with a woman praying and many pendants, crosses and medallions glued on it. Another from the same tour had an Indian and a house painted on it, with a prayer written in Spanish. Both were acoustics, distressed when they were made so they looked old.

But by far the best and most prominent guitar was his prized Fender electric, the one he’s holding on the cover of his Born to Run album.

“It is an extension of my body,” Springsteen said, according to the exhibit.

It is his favorite guitar.

Overall, the Springsteen exhibit was the best of the Hall of Fame, but we also saw many other rock and roll wonders, such as John Lennon’s piano, and many of Michael Jackson’s tour clothes, including his glove that he wore on his Dangerous tour.

We saw a small exhibit on Jim Morrison that had one of his sixth grade report cards, a Cub Scout shirt, a swim team roster, Christmas and Easter cards he made for his mother, his high school diploma, some drawings he did when he was young, and his baby book.

His baby book had his handprints and footprints, as well as his height and weight as a newborn. These mementos of Morrison’s childhood made the idolized lead singer of The Doors more of a real person, especially for those of us who’ve never heard his records.

Mary Majerus-Collins is a Reporter and Katherine Holland is a Junior Reporter, both for Youth Journalism International.