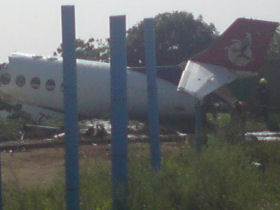 MEREBANK, Durban, South Africa – What started off as a beautiful Heritage public holiday for most South Africans quickly turned into a nightmare for those aboard a
Jetstream41 South African Airlink plane.
At 8 a.m. Thursday, the plane crashed into three pieces on the sports field of Merebank Secondary High School. Ambulance and police sirens woke everyone in the community.
Though four people were badly injured, including one on the ground, it could have been worse.
Many people couldn’t help but breathe a sigh of relief to know that the accident took place during spring break, and not while students were at school. The plane hit a spot where students love to hang out before school and during breaks.
There were no passengers on the plane.
But there’s still plenty of concern.
Shannon Chinna, 17, an eleventh grade student at the school said, “My friends and I are afraid to go back to school. What if it happens again?”
He said he saw the school’s security guard on television talking about how “he thought he was going to die when he saw the plane heading towards the sports field.”
The aircraft crashed after it had declared an emergency landing once it took flight to Pietermaritzburg from the Durban International Airport, roughly 400 meters away from the school, authorities said.
Airport officials, following protocol, stayed claim and collected during the emergency.
Residents are relieved that Captain Alistair Freeman managed to land in the field because Merebank is a clustered suburb and if the plane had come down anywhere else, it might have been disastrous.
The airport is moving to a new location next year as part of the preparations for the 2010 World Cup.