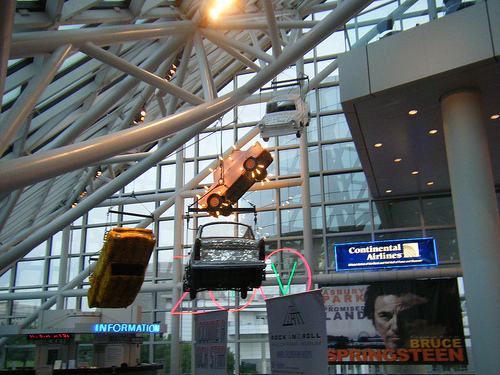 All fantastic musicians, all world famous, and all under one roof?

Yes, in beautiful downtown Cleveland, at the amazing Rock and Roll Hall of Fame.

The Hall was a truly stunning place to go, starting with the outside. The building looks like a combination of a pyramid and the frets of a guitar.

As you walk in, the first thing you see is a giant hot dog that Phish used during one of its concert tours hanging from the ceiling.

Because of the recent death of Michael Jackson, there is a memorial to Jackson near the front door. It included a giant glove holding a guitar.

People had brought in all sorts of memorabilia to surround it, including pictures, teddy bears, notes, flowers and old record albums.

Once inside, visitors can go to any of the six floors, all of which have exhibits.

The upper two floors have a temporary exhibit on legendary rocker Bruce Springsteen, who was inducted into the Hall of Fame in 1999 as a performer.

This particular exhibit was fascinating. It included recordings of Springsteen’s first band, The Castiles, as well as the recordings that won him a contract that resulted in his first album, Greetings From Asbury Park. 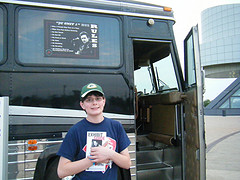 It also has posters from his bands before The E Street Band, including The Castiles, Child, Earth, Steel Mill, Dr. Zoom and the Sonic Boom and the Bruce Springsteen Band.

I was very impressed by the artifacts in the exhibit. It had the guitar that was on the cover of Born to Run, the jacket from the same photo, the clothes he wore on the cover of Born in the U.S.A., Little Steven Van Zandt’s electric guitar and Clarence Clemons’ saxophone.

Aside from the Springsteen exhibit, the major draw was the bottom floor, which included John Lennon’s jacket from the cover of Sgt. Pepper’s Lonely Hearts Club Band, an album that Rolling Stone named the greatest of all time.

The museum also has Lennon’s electric guitar and piano.

The Hall displays Slash’s top hat and coat and Bono’s The Fly outfit. It even has Michael Jackson’s famous glove.

Moving away from the artifacts, the museum has a phenomenal electronic exhibit – 500 Songs that Changed Rock ‘n Roll.
Unfortunately, the exhibit is usually very crowded. I only got to see it for a few minutes at the end of the day, having time to listen to only part of one song: Louis Armstrong’s West End Blues.

It is phenomenal, and I thoroughly recommend it.

The museum also has another electronic exhibit, an interactive on how musicians influence other musicians, with examples.

For example, a visitor would pick a type of rock, then pick a rocker or rock group. The group’s page would come up, and its music would start to play.

Connecting to them would be two major influences, and if clicked on, would start to play their music. It is fascinating to see how musicians influence each other.

On the whole, this fabulous museum gives visitors a whole new appreciation of rock ‘n roll.

I only regret that I couldn’t spend more time at the museum.

I’m looking forward to going back.

By Kiernan Majerus-Collins is a Senior Reporter for Youth Journalism International.