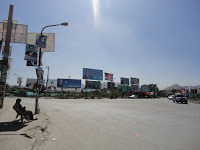 KABUL, Afghanistan, Sept. 18, 2010 – Afghanistan is holdings its parliamentary election today. This election comes a year after the 2009 presidential election which was tainted with fraud and irregularities.
This 2010 parliamentary election marks the second time the Afghan nation cast its ballots for members of parliament.
This election attracted candidates from all walks of life, including politicians, people in business, academics, warlords, film artists, singers and sports personalities.  Intellectually, the candidates differed from one another, with some not too ready to act as the voice of the people.
The female candidates, who will make up at least 25 percent of the parliament, are working overtime to win the votes of the people.

Numbering 2,500 from across the country, the candidates are battling to gain a place in the country’s 249-seat lower house, known as the Wolosi Jerga. The substantial number of candidate for MP in this election aren’t especially astonishing for the people, since last year’s presidential election had 43 candidates running for a single seat.
Kabul, the capital and the nation’s largest city with roughly 4.5 million inhabitants, offers the most candidates. More than 600 are hoping to claim one of the 33 seats allocated to the capital.
Since it has the largest number of candidates, Kabul is painted with an incredible number of posters on billboards, walls, commercial buildings. In addition, campaign leaflets are handed to drivers in traffic jams.
Crossing in the markets of Kabul during this last week before Election Day, it is quite unusual to see any ads other than for MP candidates.
The overwhelming number of MP candidates on one hand might reflect the overreach of democracy in the politics of the country. On the other hand, it may also demonstrate the ambitiousness of the Afghan people towards gaining power.
Since the start of the campaigns, the television and radio networks in Afghanistan have been allocating their peak hours to the parliamentary election coverage with programs interviewing candidates and sessions for the candidates to discuss their plans.
Election campaigns in the past three months have been a source of income for businesses such as media, printing presses or the hotels that hosted the gatherings for the campaigns.
The performance of the last parliament has made a large portion of the people apathetic about casting their votes, and many fear instability in today’s election. Hundreds of polling stations have been closed in the outskirts of the country due to security threats.
Will Saturday’s election be secure and fair, and will the new parliamentarians live up to the nation’s expectations?  The answer to these questions and more will surely be in the national and international headlines to come.
See photographs of Kabul during the campaign here.
Edrees Kakar is a Senior Reporter for Youth Journalism International.