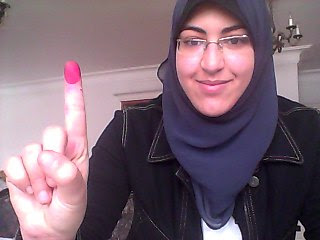 ALEXANDRIA, Egypt — Before the revolution, the idea that a person’s vote would actually count for something was a scene from a dream.

It seemed unimaginable that people who weren’t bribed or threatened could cast meaningful ballots in a legitimate election.

But since the ouster of former President Hosni Mubarak on February 11, a new sun of freedom has shone – and today, a sunny Saturday, marks the first-ever fair, transparent and free constitutional referendum in Egyptian history.

People who never thought they would ever engage in the actual choosing of their future headed to the polls in the first democratic activity of its kind that Egyptians have seen, turning Facebook profile pictures red for NO or green for YES.

Every city has hundreds of polls located in neighborhood schools, making them accessible to everyone.

The question facing voters is: Do you agree to the amendments made to the constitution?

That has been the question people from teenagers to prominent politicians have been discussing everywhere for the past week.

With many different opinions, the answers are split, with many people feel strongly about agreeing to the changes while others do not.

The one thing they have in common, however, is respect for the outcome.
The beauty of this referendum is that even though I voted no while some of my closest friends voted yes, there is no conflict.

There are some disappointing factors during the past week, however, because many imams in the mosques abused their power and influence to try to convince others to vote their way.

We have the right to state our opinions, but it is vital in circumstances like these that we give people the chance to judge for themselves.

Many charts and videos explained the pros and cons of each position and people generally made a point of saying they respected alternate views whenever they expressed their own.

A special committee offered nine amendments that limiting a president’s stay to two four-year terms, mandating that presidential nominees cannot carry a foreign nationality or be married to a foreigner, insisting the new president must drop the old constitution to start a new one, requiring judicial supervision of elections; deleting a constitutional section that put Egypt under martial law, and more.

One may ask why someone would not accept these changes.

The answer is in the timeline.

Saying yes would mean a shorter rule of the military, with parliamentary elections in six months and an agreement to keep the existing Constitution until the new president takes office.

Many who voted yes claimed they don’t want a state of chaos anymore and that saying no would only hinder the process of gaining stability.

On the other hand, those voting no, including me, believe that you cannot start a new democratic state on a patched Constitution.

It must be built on solid ground.

The time that would be granted by saying no would provide an opportunity for political parties to form and time for old parties to reorganize and start fresh so that all would be ready for elections.

My sense is that those voting yes are worried that if they voted no that the delay would mean a longer, somewhat unknown road ahead. Saying yes offers a fixed timeline.

The most vehement revolutionaries argue that a new constitution is a necessary part of their victory over the old regime. They do not believe the old one can be fixed or made legitimate with some revisions.

Almost all of the prominent opposition leaders oppose the amendments and are urging people to vote no.

While the former ruling party and the Muslim Brotherhood declared support for the referendum, it doesn’t mean only their supporters agree with them.

It is all a matter of what angle people see Egypt from and how they judge things.

Regardless of the result, people will respect the outcome because they trust the majority will decide.

Practicing freedom is totally worth waking up early on a Saturday morning.

Jessica Elsayed is a Senior Reporter for Youth Journalism International.