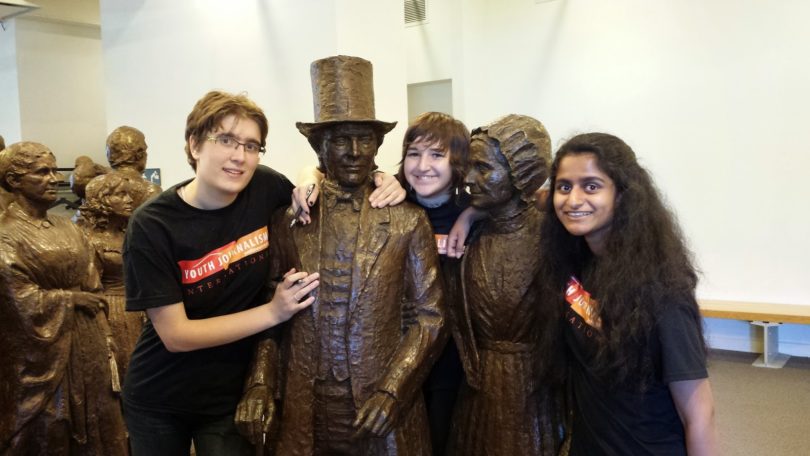 As well as learning about the key events in
1848 entering on women’s suffrage, you can also see the houses of several
important figures of this time period.
Everything is well preserved and the whole
town is like a piece of history.
The Wesleyan Chapel, which was built in 1843
as a Methodist Church, was the site of first Women’s Rights Convention on July
19 and 20, 1848. That was the meeting where the Declaration of Sentiments was
read to a crowd of more than 300 reform-minded women and men.
The document outlined the demands for
equality for women that established the struggle voting rights that continued
for decades.
In this declaration, which played off of the 1776
American Declaration of Independence, organizers wrote, “We hold these truths
to be self-evident: that all men and women are created equal.”
The Womens Rights National Historical Park,
which is part of the National Park Service, offers free entry to the chapel and
to a visitor’s center and museum in the building next door.
A fun trademark of the museum is an outdoor wall
with water pouring down it with the full Declaration of Sentiments engraved in
the stone. The water pours down the wall from the top, making small curves
around the engraved letters; good for artsy pictures or just playing with the
water with your hands.

At the visitor’s center, people can learn an
extensive history of early American feminism through creative signs and
displays.

There were clear globes with different jobs
written on them, with separate ones for men and women.


The one for men was much
bigger and with more options than the one for women, showing how many more
choices they had in the past than women.


Other displays showed the really
clear-cut gender roles that they had and how women continually got the worst
end of the deal.


On the first floor, there were statues of the
writers of the Declaration of Sentiments, including Lucretia Mott, Martha
Wright, Jane Hunt, Elizabeth Cady Stanton as well as the famous abolitionist
Frederick Douglass and other male supporters.

These somewhat creepy statues stand in the
lobby of the visitor center with statues of other people.
Three local historic homes of early American
feminists – Stanton, Hunt and Mary Ann M’Clintock – are also part of the Women’s
Rights National Historical Park. Hunt’s house is not yet open to the public,
but the other two are.
Seneca Falls also is home to the National
Women’s Hall of Fame, located just down the street from the Wesleyan Chapel.
From 1856 to 1920, when women won voting
rights through the 19th Amendment, there was growing support and participation
in the feminist movement.
After the first Women’s Rights Convention,
there were many other protests and writings demanding equal political rights for
women.

This historic Wesleyan Chapel and the educational
museum next door helped me see that women take many of the rights we have now
for granted.