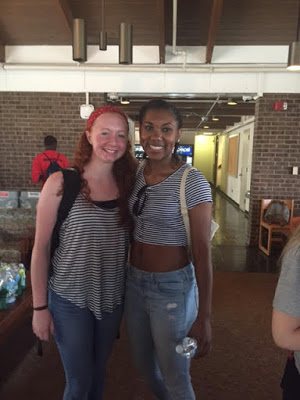 NEW BRUNSWICK, New Jersey, U.S.A. – As a student this summer at the Rutgers Summer Acting Conservatory at Rutgers University, I spent the Fourth of July with my new friends here rather than with my family.

The town hosted fireworks on July 2, which was a nice way to jump start the holiday.
The Rutgers faculty then hosted a cookout for students as an official holiday celebration. The hamburgers, hot dogs, and smell of food cooking from the grill made me think of home.

Watching Prof. Marshall Jones, the program’s director, work the grill reminded me of my dad, and how he and I would always grill together on the Fourth.

During the cookout, alumni from the acting conservatory came back to talk to us about their experiences in the program,
and where they are now in their careers.
Even though some had more success then others, the thing they all had in common was devotion and love for their craft.
I realized at that cookout that during times of struggle, having a love and passion for something will get you through.
I called my mom later that evening. I told her that I felt like I was beginning to discover myself in the short week I’d been
there.
I learned things that couldn’t be taught in a classroom. I was beginning to get in touch with my emotions, no longer felt the need to suppress them for someone else’s benefit.
As my mom listened to me she could tell how I was beginning to change.
As I heard my mom’s voice, I began to cry. It hadn’t set in for me yet that I wouldn’t be seeing her for another three weeks.

Another realization came to me, that even though it might have been hard to leave my family for four weeks, I’m going to leave
this conservatory a changed person.
Something positive will come out of this, in a way I can’t even see yet.
Chelsea Allison is a Junior Reporter for Youth Journalism International.
***
Your tax-deductible contribution can help support Chelsea Allison
and other students at this nonprofit at
www.HelpYJI.org