Aurora, Nebraska, UNITED STATES –It’s kinda funny, if you think about it, how words have so much power. I mean, it’s startling how what appear to be a completely random collection of syllables and letters can change your life.

I think it’s about time you know I’m gay, not that it’s important or anything; but to tell the story of my freshman homecoming, it’s a fact you need to know.

Zach Brokenrope with classmates in Aurora, Nebraska. He’s in the red shirt in the back row. (YJ))

I’m only going to tell you about part of it though, and that is the part that is important to me, the memory that I know I will always keep.

To freshmen, homecoming holds a desirable glamour, a feeling of growing up you just beg to obtain.

It makes you feel like your life has finally begun to achieve that pinnacle of high school experience that you’ve heard about for so long, not to sound corny or anything.

I have to say mine was beautiful, as far as school dances go. It was held in the old gym of our high school, a building from before our parents’ time that smelled eternally of sweat and floor polish.

It was the first year the administration had broken down and hired a professional DJ. In the past, it had been an older guy who at some point always insisted on playing “The Hokey Pokey,” much to the aggravation of the student body.

Crepe paper hung from every corner of the gym, covering the walls and crisscrossing as it hung limply from the rafters of the ceiling. The strobe lights hit the room at random intervals and the pulse of the music vibrated against the windows and doors that had been pried open to allow fresh air inside.

I was the first one there, me and my date, a girl named Molly I randomly asked to go with me. We’d never been that close, but knew each other fairly well and didn’t want to be complete losers by going alone.

We had managed to regain this title, however, by showing up at least 15 minutes before anyone else and eating our homecoming dinner at Pizza Hut. (We even had reservations. God, doesn’t that just reek “loser?”)

For about half an hour we sat in the bleachers, just observing our friends and peers as they came in and danced.

To me it was amazing how everyone appeared beautiful, how just the night managed to transform every assorted outcast and oddity into creatures of life and magnificence.

It was at that moment I knew that night was the night. As I watched my friends dance, I knew it was the night I would tell the first person.

Anyone who is gay and reads this knows what that’s like – the days of getting ready, thinking, contemplating who it’s gonna be, who will act the best, who you trust the most; and preparing yourself for the worst possible outcome: total rejection.

I knew it was going to be Marissa, one of my best friends. We had worked together every day the previous summer and had come to understand and know each other better than anyone else around.

We shared the same aspirations: to get out of Nebraska, become famous, and to live life like it was meant to be.

Marissa and I understood each other in perhaps the simplest ways.

With a look into her eyes, I could understand her emotions. With a hug, I knew that she was upset. It was that simple. But she was a junior, so our in-school time, save band, was limited.

It was an hour into homecoming before I saw her, standing up against a bleacher, smiling and talking with someone I didn’t know.

I told Molly I’d be right back and went over to her.

“HEY!” she shrieked as I walked up.

Her arms flung around me when I reached her.

“You look AWESOME!” she said, and eyed me up and down.

She wore a long, night-blue dress, shimmering with gems that sparkled in the light. Her long hair was pulled up and her favorite earrings dangled from her ears.

“Thanks,” she said, now totally ignoring her other friend.

“Is something the matter?” she asked. Good old Marissa. “You look upset.”

Her eyes filled with concern.

“Yeah … uh … I have something I wanted to tell you,” I said, as my stomach flipped. “Can we step out into the hall?”

Without saying another word, she grabbed my wrist and dragged me into the hallway on the other side of the room.

In the dark, empty hall, light silhouetted through the small glass window in the door. We could hear the music as it vibrated throughout the gym.

The song was just ending and I could hear people louder as the beat dropped out.

“I only trust you with this, okay?” I told her. My hands shook as “Mr. Brightside” by The Killers started playing.

I’m coming out of my cage…

“What is it Zach? Just tell me,” she pleaded.

And I’ve been doing just fine…

“It’s been killing me inside, Marissa … I’ve wanted to tell someone for so long….”

Gotta gotta be down…

“What, Zach!?” she said, worry filling her voice.

Because I want it all…

“Marissa…” My lips quivered and my throat swelled as I swallowed.

Tears streamed down my cheeks.

It started out with a kiss…

She leaned forward and put her arms around me, and I rested my head on her shoulder as I cried. She rocked me in her arms, like a mother to her child, her body against mine and keeping me warm, alive.

Everything seemed all right; it seemed like things would turn out okay, even if it was just for that moment. 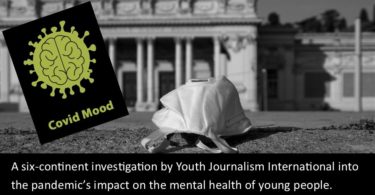 Covid Mood’s 17 news stories and accompanying photos and illustrations are by 21 students...