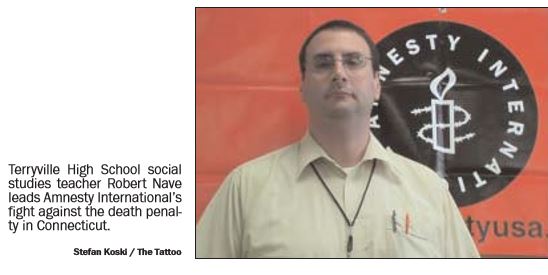 TERRYVILLE, Connecticut, U.S.A. — At the forefront of the fight to abolish the death penalty in Connecticut is Terryville High School teacher Robert Nave.
Nave, who teaches social studies, has for four years coordinated Amnesty International’s effort to ban the use of capital punishment in Connecticut.
In recent months, his anti-death penalty work put Nave in the limelight as convicted serial killer and rapist Michael Ross neared execution.
Ross was put to death early Friday by lethal injection, the first death row inmate executed in Connecticut in 45 years.
Last week, Nave was on the front lines, protesting the execution.
But Nave made it clear the issue wasn’t Ross.
“This is a matter of pure public policy,” Nave said while traveling with fellow activists last week to protest the Ross execution. “We do not speak for or support Michael Ross. We are simply against the fact that the state thinks it has the ability to kill a person. We don’t believe that the state has a legitimate right to legalize homicide.”
Working through all of the channels available to him, Nave rarely seems to take a rest from his battle against state-sponsored death.
On a personal level, the activist teacher is also a realist.
He said he understands that not everyone is free from blame and that consequences must follow action.
But he remains committed to his stance.
“If society really wants to kill every psychopath out there, then we have a whole lot of people left to get rid of,” Nave joked a few days before the execution. “Is Michael Ross a nice person? No. I know him. He is one of the sickest people that I have ever met. But in the end, our organization is not about saving Michael Ross or anyone else in particular. The person in question could be Adolph Hitler or Slobodan Milosevic, Michael Ross, or even you or me. The point is, the state should not have a license to commit homicide.”
Ross admitted killing eight young women in Connecticut and New York. Six were teenagers.
Dzung Ngoc Tu, 25, a Cornell University student, was murdered on May 12, 1981. Ross killed Tammy Williams, 17, of Brooklyn, Conn., on Jan. 5, 1982. Two months later, Ross killed 16-year-old Paula Perrera, of Wallkill, N.Y. Debra Smith Taylor, 23, of Griswold, Conn., was slain June 15, 1982. Ross murdered Robin Stavinksy, 19, of Norwich, in November 1983.
Two 14-year-old girls from Griswold, Conn., April Brunais and her friend Leslie Shelley, were murdered together April 22, 1984.
Wendy Baribeault, 17, of Griswold, was the last of Ross’ known victims. She was killed June 13, 1984.
Ross had given up his appeals process and ‘volunteered’ to be executed. Still, his family members, former defense attorneys and others fought in court to stop it. The battle dragged on for years until it finally ended early Friday at Osborn Correctional Institution.
Protests were part of the drama, and after police said opponents would have to stay a mile and a half away from the prison, Nave’s group filed suit to stay close, and won.
In his fight against capital punishment, Nave at one point called upon Gov. Jodi Rell to push the button to end Ross’ life.
“If the state is going to kill someone,” Nave said, “then the governor should be the one to do it.”
Nave acts as the director of the Connecticut Network to Abolish the Death Penalty and also works with the Urgent Action Network. With his large group of volunteers, Nave wants to end Connecticut’s use of capital punishment.
A dozen states have already banned it, he said, four of them in New England.
But Nave is less than optimistic about the goal in the wake of the Ross execution.
“With an execution under our belt, there will be a psychic imprint on people’s minds that this is acceptable, that we can be as hostile as the murderer,” Nave lamented.
“I don’t believe that’s the right message to send to our citizenry, particularly the youths: ‘Murder is okay as long as the state administers it.’ That’s a very scary message.”