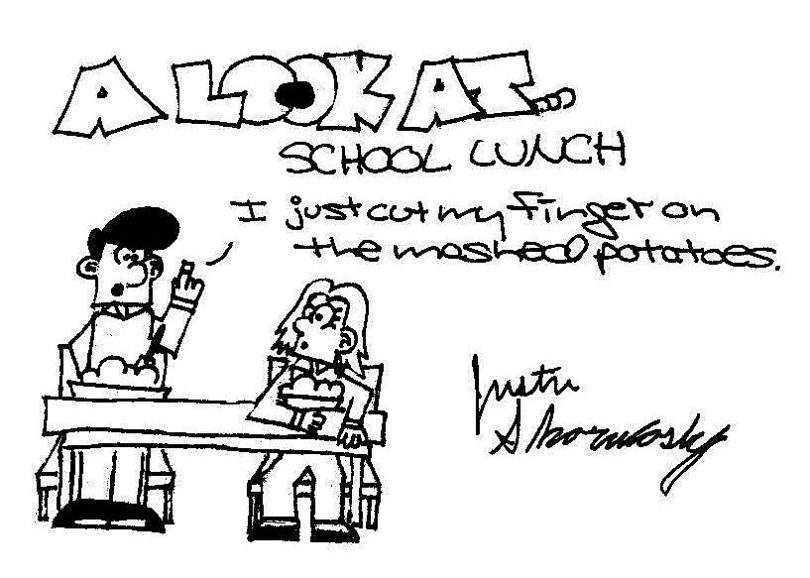 In their rare inspections of local high school cafeterias, Bristol-Burlington Health District experts haven’t found much of anything that worried them — but some of their findings might make students wonder.

A review by The Tattoo of health department inspections conducted during the past five years found numerous small problems, including some that linger year after year without officials correcting them.

And then there’s the stuff students expect.

In 1993, for instance, an inspector warned Central to “clean dead roaches from behind and under equipment.”

“They would not be open if we didn’t feel they were safe to eat in,” Amodio said.

Yet the last time Eastern and Central were inspected — in April — their violations were severe enough that the health department could have shut both cafeterias down.

At Eastern, the school used potentially toxic lubricants on machinery, specifically WD-40, instead of food-grade oil. That earned the cafeteria a 4-point demerit that is, on its own, bad enough to let the department close the cafeteria.

At the same time, Eastern also failed to keep hot foods hot enough and cold foods cold enough. That also got the cafeteria a 4-point designation.

Amodio said, “If they have below an 80 or a 4- point violation, we have the authority to close them down. We try to correct the 4 point violations on site.”

Central weighed in with a score of 72.

It managed to serve up potentially hazardous food as well because it neglected to chill the topping on its pudding.

Central was told to install backflow devices on its steamer and a sink and to toss out “rusted/dented cans.” It also failed to adequately protect self-serve foods, prevent machine oil from coming out of the mixers and the left the back door open to vermin.

Greg Boulanger, director of food services for the city school district, could not be reached for comment for this story.

This year’s crackdown by the health department appears to have been a fluke. The schools normally rate in the 90s.

“No one gets 100,” said Health Director Patricia Checko. “I’d be surprised and upset by 100s coming through here.”

Amodio said she was especially hard on both Central and Eastern this year because she wanted to ensure that the $40 million renovation project beginning next year would include measures to fix even relatively minor problems.

For instance, she said the cafeterias have two basin sinks now but they ought to have three basin ones to wash, rinse and sanitize dishes more efficiently.

One problem at Central has lingered since at least 1972.

An inspector that year warned about “paint flaking on walls in walk-in cooler.”

The problem was noted time after time in the years since. And this year, once again an inspector told Central to “repair peeling paint [on] walk-in walls.”

Its last inspection, in Feb. 1995, earned it a 98 rating after a warning to sanitize equipment better. Before that, it escaped inspection for about four years.

Amodio said she has walked through the cafeteria a few times since its last formal check when she happens to be at the school.

“Obviously, we need to get in there and do a thorough inspection,” she said.

State law says that the cafeterias should be inspected at least every 120 days, or three times a year. “In a perfect world that would happen,” Amodio said.

Amodio said that all the schools need more scrutiny.

“All this should have been done a lot more, since this has been brought to our attention I can tell you it will be done more often,” said Amodio.

Amodio said the health department tries to educate people rather than cracking down on violators. “We work with people,” she said.

Generally, she said, the cafeterias are doing a better job maintaining standards these days.

“Since I started working here they’ve made a tremendous turnaround in a positive way,” Amodio said.

She’s even got kind words for the food the cafeterias serve. It’s gotten better, Amodio said, and “there’s something for everyone.”

“I can’t understand why they don’t like the food to begin with,” Amodio said. “I would eat in there.”