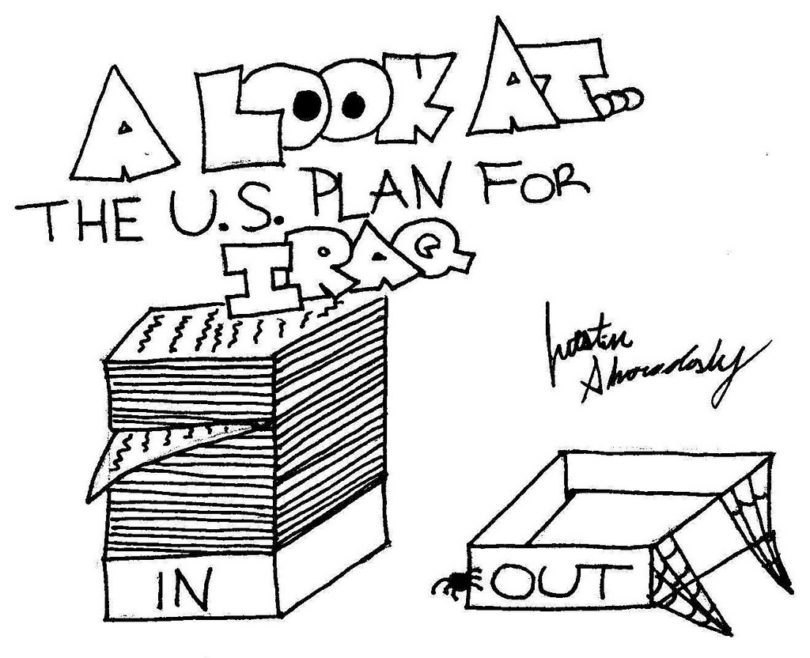 Amidst the ocean of green hats and balloons of St. Patrick’s Day in Hartford last month, there were also banners and cries of discontent.
Gathering around the state Capitol, dozens of dissatisfied protesters marked the second anniversary of the invasion of Iraq in the middle of Connecticut’s St. Patrick’s revelry.
“They deserve to say their piece, too,” said the green-clad Derek MacDonald, age 41.
“We were warmly welcomed by the people of Hartford,” said protester Tom Barnicle, 23, a Central Connecticut State University senior involved with the Progressive Student Alliance.
Marching in front of the Capitol at noon, the demonstrators chanted and carried signs condemning the invasion.
Rallying together an hour later, the protesters denounced the war, making reference to the more than 100,000 lives lost in the past two years. They also cited the fact that Iraq possessed no weapons of mass destruction and criticized the Bush Administration’s foreign policy, calling it paranoid and delusional.
The Hartford rallies were not the only ones held that weekend. There were anti-war protests in major cities around the world, many calling for a timetable for the removal of American troops from Iraq, a nation which now possesses its own multi-ethnic government and military. Many Coalition countries, most notably Spain, have removed their forces from Iraq and others, like Italy and the Ukraine, have recently made requests to leave the area within the next year.
On the campus of the University of Connecticut in Storrs, protesters decided to spend the entire week outside, sleeping in tents and rallying together around a large “Peace in Iraq” banner.
Like the Hartford protesters, the Tent People, as they became known, were given free clothing and food from various organizations.
The Tent People even entertained local religious leaders who stopped by to let the protesters know that their efforts were much appreciated.
Despite the overall sense of solidarity among the anniversary demonstrations, the protesters themselves seemed less than optimistic about how the American invasion of Iraq will be remembered by history.
“I think that people won’t really remember the specifics of the Iraq War in the long run,” Barnicle said. “People will probably forget that we went about bringing democracy to Iraq in the absolute worst possible and [most] undemocratic way.”

Steven Durel is a Reporter for Youth Journalism International.