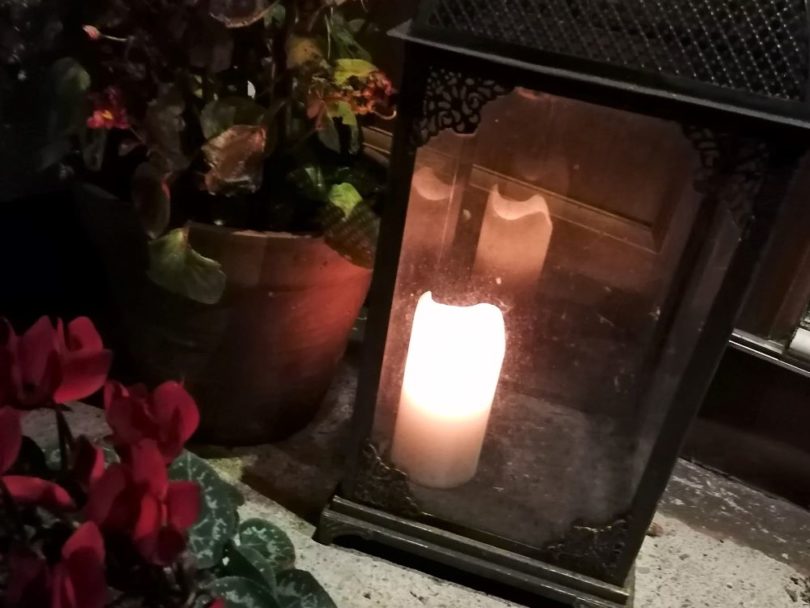 A candle on a Dublin doorstep in memory of those who died on Bloody Sunday 100 years ago. (Daniel Cleary/YJI)

DUBLIN – A lone candle flickers in the darkness of a Saturday night in Dublin. It is eerily quiet on a night when the city should be bustling. Covid-19 has that effect.

The candle paints a poignant image, a small beacon of hope on a pitch-black night. It represents the times in which we are living, but on this cold evening, it represents something more.

The Gaelic Athletic Association, the organization responsible for Ireland’s national sports, asked that people put a candle in their window at dusk on the 21st of November this year to mark the centenary of a day known as Bloody Sunday.

The idea was to remember the 14 people who went to a Gaelic Football match a century ago and never returned home.

Those 14, including three schoolboys, were killed after British forces burst into Croke Park in Dublin and opened fire on the crowds. This was a reprisal for the Irish Republican Army’s assassination of a number of senior British officials earlier that morning.

In my view, the events of that fateful Sunday played a part in shaping the Ireland I live in today.

At the time, Ireland was still under British rule and a fierce guerilla war was raging between the IRA and the British, even if the British government refused to acknowledge the war.

There were many people in Ireland who wanted rid of the British, but there were also people who just wanted to go about their daily lives, not particularly concerned whose flag flew over Dublin Castle.

But Bloody Sunday changed that.

The police forces operating under British rule – the Royal Irish Constabulary, the Black and Tans and the Auxiliaries – had never been shy to display their anger following an IRA attack.

They had set the coastal town of Balbriggan alight following an IRA attack and would later go on to set fire to more than 300 buildings in the southern Irish city of Cork.

Just over a year after Bloody Sunday, the British government signed an agreement with the Irish known as the Anglo-Irish Treaty. The IRA had brought the might of the British Empire to the table, negotiating dominion status for our small nation, a gargantuan achievement which eventually led to the foundation of the Republic of Ireland in 1949.

Bloody Sunday encouraged people to take the side of the IRA – perhaps it was one of the factors which meant they could call the War of Independence a success.

It certainly had a part to play.

The actions of that day are entrenched in the history of this small island. It was a day in which blood stained the turf of Croke Park, where every year more than 80,000 people now flock to view the All Ireland football and hurling finals.

Those 14 who died did something similar. They were the same as anyone who attends sports events. They went to a challenge match, to see heavyweights Dublin and Tipperary clash in what promised to be an enthralling game.

They didn’t even witness a score. The game was in its infancy when the soldiers and policemen opened fire on the crowds.

Jane Boyle attended the match with her fiancé. They were to marry in five days. Her family were tasked with preparing a funeral instead. She was buried in her wedding dress.

The happy excitement that must have been felt by those in attendance that day was replaced by paralyzing fear.

Even 100 years later, I, like so many others, grieve for those 14 who never got the opportunity to walk out of Croke Park again.

As the Irish saying goes, Ar dheis Dé go raibh a n-anamacha, May their holy souls be on the right side of God.