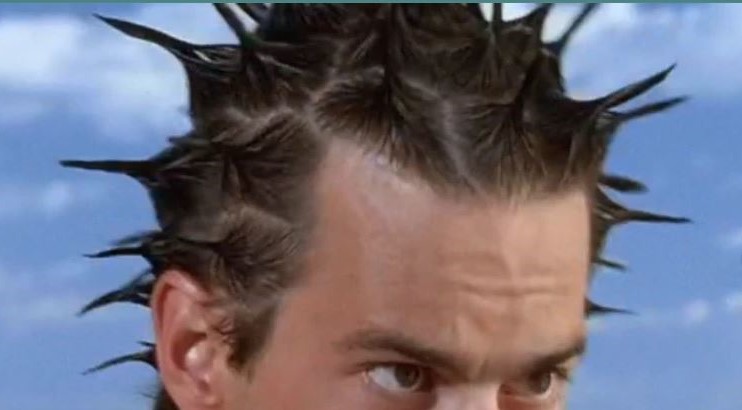 Bristol, Connecticut, United States — Something new has popped up at Chippens Hill Middle School — the boys’ hair.
An intriguing new do has taken the school by storm.
This hairdo is a perfect example of what a guy would look like if he ran into a door at top speed: the frontal portion of the hair is molded and shaped until it stands up on end.
It’s the only way to truly say, “Look at me; I’ve got hair gel!”
And as if this wasn’t enough, some budding artists have taken to adding a splash of color to the do. Who wouldn’t appreciate the oh-so-natural look of a blond stripe down the top of their head?
Scott MacDonald, an eighth grade student at the school, has been spotted sporting the new style.
To accomplish this hairdo, MacDonald said, “You just comb it up with a little gel.”
As for maintenance, MacDonald said he doesn’t have many problems. But he said, “It might get a little fuzzy after gym.”
Another student donning this impressive flip is Garrett Lavertu, an eighth grader at the school.
“It seemed like a good thing to do,” said Lavertu. “Everyone else was doing it.”
Lavertu said he first saw this style when he was in sixth grade, but only started it last year.
“Other people think it’s stupid,” says Lavertu, but that didn’t affect his choice.
Where did these two students and all the others with this hairdo get the idea? Eighth grader Joe Kulak claims he was the first person with the daring do, and he’s proud.
“I did it to be different,” says Kulak.
Kulak said he came up with the idea in the summer of ’98, before he entered the sixth grade.
Asked how he came up with it, Kulak said, “First I parted it, then spiked it, and then combed it to the front.”
Other students gave the hairdo mixed reviews.
Both Chelsea Keegan and Terri Fawcett said they like it. Hair makes a big impression on them, they said.
Amanda Haley said it looks nice.
“It’s pretty jiggy,” Haley said.
But Shana Pilewski said she doesn’t like this style because everyone does it.
It’s not James Holick’s style, either.
“I hate it, because I hate preppies,” said Holick.
Holick says he’s never tried the hairdo, and most likely never will.
“If someone paid me a million dollars, maybe,” he said.
If Holick named the hairdo he hates, he says he’d call it “mutation, because they look like they have a horn growing out of their heads.”
Holick has his own unique style, which he calls “spiked.”
He said he achieves this style with three things: “Gel, gel, and gel.”