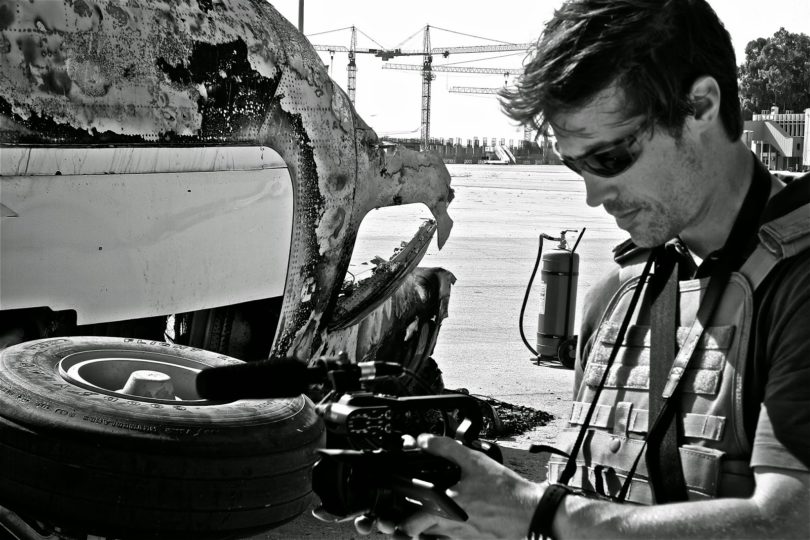 Journalist James Foley in Tripoli, Libya in August, 2011. Photo by Jonathan Pedneault, used with permission through the www.freejamesfoley.org website.
HOUSTON, Texas, U.S.A. – He risked his life for our news. I write this, sitting in a safe neighborhood in greater Houston, with headphones on and internet connected, far removed from any and all conflict, barring the occasional wars of words whenever my natural teenage instinct to disagree with most of what my parents say kicks in.

I write this blissfully unaware of the constant danger American journalist James Foley, who was beheaded today by the Islamic State of Iraq and Syria, or ISIS, endured throughout his reporting in the Middle East.

In a heartbreaking statement late Tuesday, his mother, Diane Foley, said her son “gave his life trying to expose the world to the suffering of the Syrian people.”
We must give journalists like James Foley the respect they deserve, and we cannot take them for granted.

James Foley in Aleppo, Syria in July 2012, four months before he was taken hostage. Photo by Nicole Tung, used with permission through the www.freejamesfoley.org website.

And yet, in our nation, which prides itself on giving its citizens the liberty to choose for themselves to read books and raise children – to say and do anything they want unless it would bring harm to others – our nation, bestowing upon itself the dubious honor of being leader of the free world, needs to practice what it holds so dearly to its heart.
The events spawned by the murder of Michael Brown in Ferguson, Missouri have made this painfully clear to us. Reporters have been assaulted by police, recalling the 1968 riots at that year’s Democratic National Convention.
Peaceful protesters have been tear-gassed, showing shades of the ongoing Syrian conflict between President Bashar al-Assad and those who view him as corrupt.
Our truth-tellers are punished for trying to do their jobs here, just as they are abroad.
James Foley’s horrific murder shows how much power two little words, “free press,” can have in nations where such a thing is only an idea at best. It also shows clearly the great lengths we go to – that we must go to – to maintain it.
Eli Winter is a Senior Reporter for Youth Journalism International.
***
Your tax-deductible contribution can help support this nonprofit at
www.HelpYJI.org