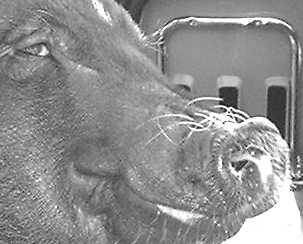 BRISTOL, Connecticut, U.S.A. — Did you ever kiss someone, only to be greeted by a piercing squeal?
Well maybe, but in your case it probably wasn’t a pot-bellied pig.
But soon one of the principals of Bristol’s three high schools may be able to say that he’s smooched with a friendly farmyard oinker.
The principals, Dennis Siegmann of Bristol Central High School, V. Everett Lyons of Bristol Eastern and Mark Salisbury of St. Paul Catholic, are contestants in the city’s annual “Kiss the Pig” contest.
Nancy Blanchette of Ultimate Wireforms is the fourth potential pig kisser.
This year the contest, sponsored by the Bristol Boys and Girls Club, is raising money for the After Hours teen center in Bristol. Votes cost $1 each and can be cast with any contestant or at the club.
“Money has been rolling in,” said Jim Truscio, club director. As of a few days ago, he said, Blanchette was in the lead.
If Lyons wins the contest, not only is he prepared to kiss the pig, but also to dye his hair blue.
Though he said he’s not doing this to fit in with the students, he did say he’d “lived with grey all these years, blue might be an interesting change.”
But since students will be responsible for the dyeing, he’s unsure how he’ll end up.
“They may do a Mohawk,” Lyons said.
Sadly, Seigmann will not be taking part in this aspect of the contest.
“My problem would be having hair to dye,” he said.
But that’s okay. Seigmann and the others still have a chance to win the most sought-after prize: a chance to kiss Daisy the pig.
Daisy is one very popular piggy. Some people might even call her a ham — she makes appearances at town events, like the Bristol Home Show, where she was seen in her personal polka-dotted carriage.
What luxury!
Daisy may be famous, but that doesn’t mean she’ll turn up her snout at the common folk. In fact, both Lyons and Seigmann have met the little porker and Lyons boasted that he even got to hug her.
Students at Eastern also got to meet the celebrity on Friday during a back-to-school barbecue. Before the barbecue, Lyons promised that the first-ever guest of honor would “not be on the menu.”
The winner of the Kiss the Pig contest — whoever raises the most money — will cozy up to the cuddly little cutie at Minors Farm at 1 p.m., Sunday, Sept. 29, where the kissing will take place.
“The winner gets to humiliate himself in front of the entire community,” said Lyons.
Both Lyons and Seigmann said they were hoping to win.
“I would enjoy kissing the pig, anything for the Bristol Boys and Girls Club,” said Seigmann.
Lyons said he’s “competitive enough” for the contest and said his wife has been “extremely understanding.”
But are the students as excited about the contest as the contestants?
“If it’s for donation, it’s cool,” said Rafaela Corri, who goes to Central.
But Lyons said he expected much more student interest than he’s seen so far.
Even if there can only be one winner, who knows? There may be some swinely compassion for the losers. Maybe Daisy will have enough extra kisses to go around.