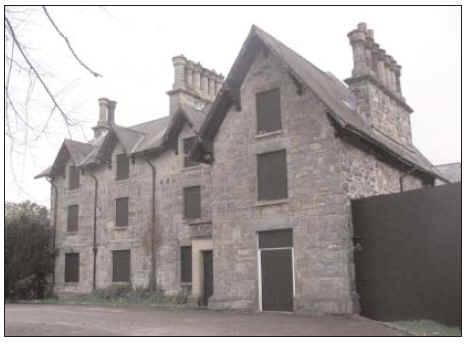 LLANRWST, Wales – Nearly 400 years after the first students began taking classes at Llanrwst Grammar School , its doors have closed for the last time.
With nobody there, the old senior school now looks eerie. Its windows are boarded up with black planks.
“It’s sad,” said Elgan Thomas, 18, a student from the village of Penmachno .
Eleri Williams, an 18-year-old from Egwlysbach who is a former pupil of the school, said she thought the old school had character.
But, she said, it needed significant maintenance work to the interior because there were cracks in the walls and the windows.
The closure of the historic school, after nearly three decades of planning, allowed senior pupils and teachers to move in February to a new school that also included younger students.
But the move left the worn-out old building – where buckets were needed to catch the rainwater that leaked through the roof — vulnerable to thieves.
The absence of students has also hurt nearby businesses in the small market town.
Since the 1960s, the historic school has been called Ysgol Dyffryn Conwy, in keeping with the Welsh heritage of the Conwy region of northern Wales . Its students speak Welsh and English.
Not long after the headmaster of the school, Ifor Evans, expressed concern that the empty school would get vandalized, computers got stolen from it and the old stone steps were broken.
Michael Bone from The Farm and Dairy Produce shop near the former school said his business has “dropped since the school closed.”
He said this is “always bad” news and that probably many other local businesses in the area felt the same.
But students may be better off since they may now opt for a full school meal instead of stuffing their faces with fish and chips at lunchtime.
Now all of the 800 pupils, from ages 11 to 18, are on one site at a newly improved school said to cost £9 million – about $17 million – funded under a Private Finance Initiative.
Evans said the new school meant that “there is less commuting for staff and students” and that the sixth formers could act responsibly and set an example as senior students of the school for the younger pupils.
Charlotte Jones, a 16-year-old from Bryn Pydew, said she doesn’t like the new school as much because now there are younger children everywhere. She said she preferred the old school, which just had senior students.
Billy Williams, one of the school’s deputy heads, said that having the school further from the town meant that students would be more orderly since they could no longer go there easily.
Some students used to cause trouble when they went to the nearby town at lunchtime.
In the past some had even decided to walk on the nearby railway track, a potential hazard.
When the old school remained open, teachers had to commute at least a mile between the two sites.
Janet Hughes, another deputy head, said that the sixth formers could take part in the school’s buddy system.
“This is an exciting time for Ysgol Dyffryn Conwy,” she said. “The feedback I have received is generally positive. I don’t think there is anything negative about the school.”
The new school has several security cameras across the site, something the old school didn’t have at all.
“It’s nice to know the children are safe,” said Delyth Algieri, a headmaster’s secretary.
Tilly Goodwin, another secretary, who has been working in the school for 36 years, said she really likes the combined school and described it as “spacious.”
She won’t have long to enjoy it, however, since she’s retiring in June.
“I won’t miss getting up at half past six , but I will miss the companionship of administrative and teaching staff,” Goodwin said. “I will of course miss the pupils!”
Most students said they are much happier in the new school.
For example, the toilets in the old school hardly ever had toilet paper and the locks on the doors were broken
In the new school, the toilets are clean and there’s even soap.
But at the old school, there were fewer restrictions on students. Now the catering company Sodexho operates the new school and many students feel it clamps down on them too much.
“I felt that the old school had more freedom for the senior pupils,” said Emyr Algieri, an 18-year-old from Llanddoged. “I think pupils need more freedom during the later years of school or else they’ll feel dominated and unable to cope in the world on their own.”
It’s unclear what will happen to the old building now.
Sir John Wynn, who’s been dead for nearly four centuries but who donated the school, dictated long ago that it could only be used for educational purposes.

John Hughes is a Reporter from Wales for Youth Journalism International.