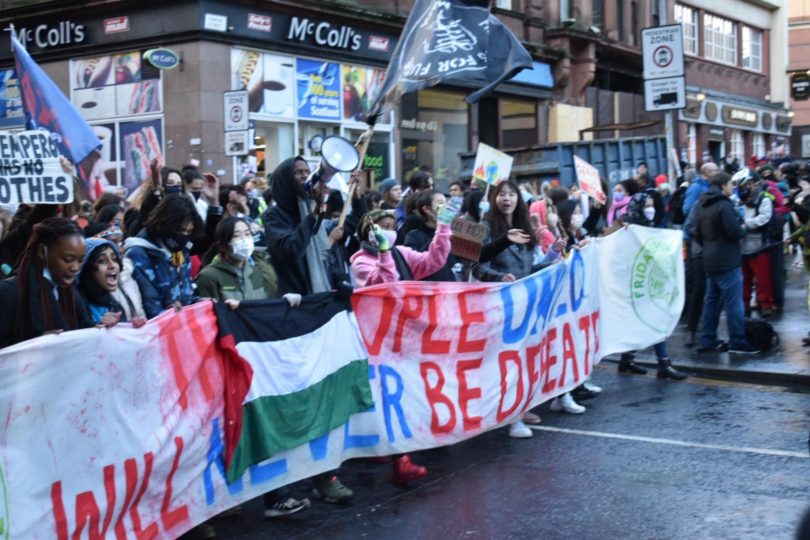 SEATTLE – As the world followed the United Nations Climate Change Conference in Glasgow, Scotland over the past two weeks, citizens watched as global leaders made countless promises and pledges to reduce carbon emissions, increase renewable energy, mitigate rising sea levels, and much more.

But as the summit concluded on Friday, a group of voices were missing from behind the podium: the opinions of young people.

We heard their calls for change on social media, in schools and classrooms, and even outside the summit itself as a Friday for Futures march rallied in the streets on November 5th.

But ultimately, youth opinions and ideas were, for the most part, excluded from the narrative.

To Ethan Laghaein, an 18-year-old from Snohomish, Washington, the lack of youth voice in climate change is both frustrating and concerning.

“I think there needs to be more activists within our generation because we are going to be the ones who will see the effects, more than world leaders at the summit who are 50 plus,” Laghaein said. “It’s in our interest to fight for both research and action.”

But despite the lack of representation in Glasgow, young people from across the globe followed the summit online.

Laghaein, who watched the conference with his Comparative Government class at school, described the summit as “important, because nations really have all the control over what happens with climate change.”

“It’s all in the big players,” Laghaein said.

Sixteen-year-old Joel Placencia also followed the summit from his home in Brea, California.

But Placencia said he is worried about what’s to come after the conference has concluded.

“I feel like nations have made a lot of commitments, but I’m not sure to what point they’ll be held accountable. We’re in a very bad place right now,” Placencia said.

One of the biggest issues with climate action is the lack of urgency.

“I don’t know if every country is ready for the effects of climate change, to be honest,” said Laghaein. “I think a lot of the measures being taken right now are a little too conservative on their estimates of when and to what degree it’s going to affect us.”

But to Santoshi Pisupati, 15, from Redmond, Washington, emphasizing climate change as an urgent matter goes beyond policy making.

“I feel like global leaders prioritizing climate change will ensure that, not necessarily action is taken, because governments can be pretty slow to implement laws, but more so that public opinion is swayed in that direction,” Pisupati said.

In this way, the voices of young people, although often excluded from policymaking, are crucial to climate action for their public impact.

“Young people show the world that hey, it’s possible for you to be engaged and really make a difference to the planet. I do believe youth need to have more involvement in sustainability and climate change activism,” said Pisupati.

One of the most famous youth climate activists is Greta Thunberg, an 18-year-old from Stockholm, Sweden who rose to prominence in 2018 after skipping school to protest in front of the Swedish parliament building. Many admire her not only for her work in climate action, but for the role model she has become for many other young people looking to get involved in the cause.

Climate change now is cloaked in generic statements about global warming being terrible for the environment, Pisupati said. “What Greta does instead is that she says, ‘We know climate change is terrible, but we also know that we’re not doing anything about it.’ That kind of a statement has power.”

Pisupati is no stranger to climate activism. As a member of a local non-profit known as Sustainability Ambassadors, Pisupati works with other youth in the area to create, plan, and execute numerous projects with the goal of “rapidly advancing a sustainable future.”

Some of the projects include petitioning for nearby school districts to switch their default search engine to one that helps plant trees, or partnering with solar installation companies to advertise the importance of renewable energy.

“We’re really just trying to engage our community in sustainability through the voices of youth leaders,” Pisupati said.

But as the Glasgow climate summit concludes and time continues to tick by, the focus is turned to the future of our planet – one Placencia described as “looking pretty grim.”

“A lot of things are going to get worse before they get better,” Placencia said. “But I am hopeful, and I do think it’s possible for us youth to fix this.”

Jasmine Zhen is a Junior Reporter with Youth Journalism International. She wrote this story.

Owen Ferguson is a Senior Correspondent with Youth Journalism International. He took the photograph in Glasgow.

Owen Ferguson is a Senior Correspondent with Youth Journalism International from Scotland, UK.