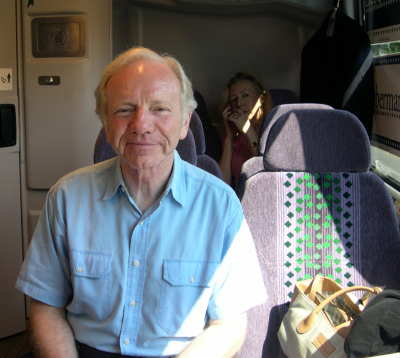 U.S. Sen. Joe Lieberman on his campaign bus in Bristol, Connecticut shortly before a primary that may force the one-time Democratic vice presidential candidate to run in the general election under the banner of a newly created party. (Kiernan Majerus-Collins/YJI)

BRISTOL, Connecticut, U.S.A. — Six years ago, U.S. Sen. Joe Lieberman, a Connecticut Democrat, almost became vice president.
Now, facing a tough August 8 primary against anti-war newcomer Ned Lamont, Lieberman’s fighting just to hold on to his place in the Senate.
Many Democrats who oppose the war in Iraq and hope to bring the troops home are turning away from Lieberman, who supports the war, in favor of his multi-millionaire challenger.
Lamont pumped lots of his own money into his campaign to try to turn the primary into a referendum on President George W. Bush.
“I’m trying to tell people I’m not George Bush,” said Lieberman.
The primary has attracted worldwide attention because polls show that a majority of Connecticut Democrats are so opposed to the war that they may be ready to reject one of their party’s best known leaders because he’s endorsed the war. 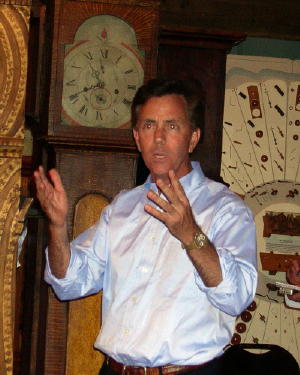 Ned Lamont at a campaign event at the American Clock and Watch Museum in Bristol. (Mary Majerus-Collins/YJI)

“It’s time for the Iraqis to step up and take care of their own destiny,” Lamont told an enthusiastic crowd at the American Clock and Watch Museum in Bristol, Conn., 10 days before the primary. “Our military presence is what’s fueling the insurgency.”
Lamont’s stump speech – sprinkled with plenty of jabs at Bush – focuses largely on bringing the troops home from Iraq.
“Our invasion of Iraq was wrong,” said Lamont.
If Lieberman is re-elected, Lamont said, the senator will once again support the president.
Bush has “taken the country way off course and Joe Lieberman was cheering him on the whole way,” Lamont said.
The president isn’t on the ballot, Lieberman said.
“Saddam Hussein was a really bad dictator. He hated America,” Lieberman said. “I believe we made the right choice in getting rid of him.”
“Nobody really likes to support a war,” the senator said, but “sometimes you have to vote for it” because the alternative is that “Americans might be harmed.”
“Now we’ve got to put a lot of pressure on the Iraqis so they can take care of themselves and we can bring the troops home,” Lieberman said.
Lamont said America has to “start investing in our country and treating other countries with respect.”
“When Democrats start winning again, that’s when America starts winning again,” Lamont said.
One thing both candidates agree on is the need to help children, teenagers and the educational system.
Lieberman says his campaign is “about the future” and the “future includes children and teenagers.”
Both Lieberman and Lamont said children and teenagers should have better education in science, math and technology.
“We’re not treating our children right,” said Lamont, who has taught a class on entrepreneurship at Harding High School in Bridgeport. “They’re going to inherit debt from this generation.”
If Lieberman loses the primary, he said he will run in the November 7 general election as the candidate of the newly created “Connecticut for Lieberman Party.” Lamont said that he’ll back the winner of the primary.