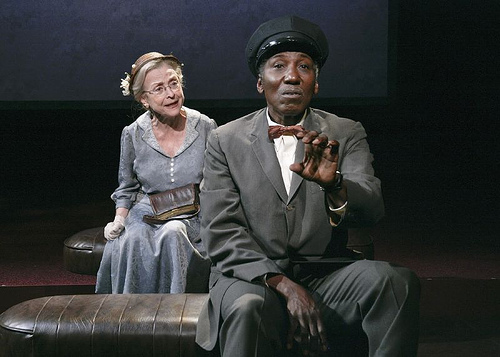 Hartford, Connecticut, UNITED STATES – “Driving Miss Daisy,” playing at TheaterWorks in Hartford, is quite a remarkable ride for not only the main characters, but the audience too.

The plot centers on the play’s namesake, a white Southern woman by the name of Miss Daisy Werthan, and her relationship with her black driver. They lived in Georgia during the civil rights movement in the 1950s and 1960s.

The play abruptly begins when the elderly Miss Daisy, played by Rosemary Prinz, gets into a car accident on her way out one day.

Her son Boolie Werthan, played by John Leonard Thompson of various plays, hires a black driver for his mother.

Independent Miss Daisy refuses to accept Boolie’s gesture, insisting that the accident was the car’s fault. In a witty conversation between the two characters, Miss Daisy accuses Boolie of “just being hateful” when he tells his mother that she is considered to be a risk to the insurance companies.

He replies, “Yes Mama, I’m making it up. Look in the driveway – every insurance company in America is out there, waving their fountain pens at you!”

Finally, the elderly woman begrudgingly complies with her son’s wishes. The driver Hoke Coleburn, played by Mel Johnson Jr., arrives for his first day on the job. Refusing to let him drive her anywhere, Miss Daisy has Hoke searching for things to do around the house.

After six days – “just like it took the Lord to make the world,” according to Hoke – Miss Daisy succumbs to his sincere and simple requests to drive her. He calmly let her in the car and drove her to the store as she sat in the backseat and screeched directions and driving instructions to him.

After a few issues between driver and passenger, it becomes apparent that Miss Daisy does not mind Hoke’s company, and soon starts to depend upon it. He accompanies her to her husband’s grave and helps her around the house, and she soon teaches him to read.

As the years pass, Hoke becomes a caregiver to Miss Daisy, and even drives to check on her during an ice storm. One day, she becomes ill and falls in a state of confusion. When Hoke tries to calm her down, she admits that he is her best friend.

She continues to love him in her time at the elderly home where she moves. And Hoke visits her at the end of the play, even though he also becomes too old to drive himself there.

The play is remarkable in its simplicity. The plot developed at an unhurried pace. The set changes were not intricate, nor was the car, which was two benches placed at the front of the stage. But the simplicity allowed the audience to become immersed in the relationship between Miss Daisy and Hoke, and the dependency that they soon developed upon one another. This, in addition to the fact that there were only three cast members, made the play a more personal and endearing experience than others that I have seen.

I was impressed by something as simple as the timing of the sounds. Specifically, the sounds of the imaginary doors slamming shut just as Hoke put out his arm to shut them, or the sound of the car starting exactly as Hoke turned the invisible ignition nearly made the audience forget that the characters were not actually in a car.

Also, even though the play is set during the civil rights movement, it explores a less obvious form of the social issues that were occurring at the time because it does not revolve around any prominent leader or specific event of the time. Miss Daisy is not a racist character, but there are times in the beginning of the play when she is obviously concerned about other people’s opinions of her being driven by a black man.

The story also subtly demonstrates the changes that were occurring during the civil rights movement by showing the change in Miss Daisy’s opinions.

Overall, the play is an endearing story about a friendship that formed between a reluctant old woman and her sweet driver during a time when social issues were at a boiling point. It’ll leave you wishing for just one more ride.

The 20th Anniversary Production of “Driving Miss Daisy” is running at TheaterWorks in Hartford, Connecticut, until October 14th.

TheaterWorks starts its new season with “Doubt,” by John Patrick Shanley. It runs November 9 through December 23.