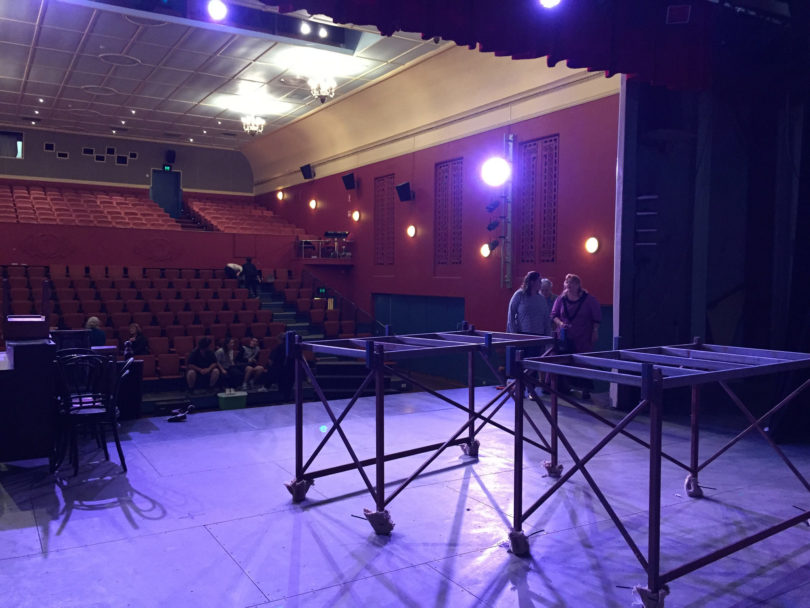 Being part of musical theater in high school not only gives you a view from the stage but an entirely different way of expressing yourself. (Jack Ward/YJI)

Ararat, Victoria, AUSTRALIA – Musical theater is an art form full of potential, one that allows humans to express themselves in ways that can’t be replicated.
Telling a story, live onstage through acting, singing and dancing has helped me personally thrive and grow. Musical theater performances – known commonly as musicals – are performed at many different levels of production. There are big-budget productions on Broadway and in London’s West End, national and international tours, regional shows and well as amateur and school groups.
Musical theater allows both professionals and amateurs to express their art – but is Australia’s education system supporting teenagers so they can thrive in the arts?
I saw my first musical eight years ago at Her Majesty’s Theatre in Melbourne, one of many theaters in Victoria’s capital. I sat and watched ‘Mary Poppins,’ mesmerised as I watched her fly over the audience with her umbrella and realized that I wanted to perform and be up on the stage.
The magic and energy I experienced while watching ‘Mary Poppins’ led to a future of show tunes and costume fittings. Since 2010 I have seen another nine professional shows including Aladdin, Annie and The Lion King.

Although watching professional shows is inspiring, I wanted to be up on the stage.
In 2015 I had the opportunity to perform the lead role in my grade six school production. The show was written by the schools music/drama teacher and was a fantastic starting point for me.
After that show I couldn’t wait until my next opportunity, and it arrived the following year. I played a minor role in Ararat College’s How the West Was Warped’ and a lead role in their production of Grease’ last year. I also decided to branch out into community theater, which saw me perform in Ararat Musical Comedy Society’s production of PIRATES a year ago and Curtains just recently.
I can never really describe in full detail what it feels like when an orchestra begins to play the overture, when their volume increases and the curtain rises – it’s a surreal feeling, almost as if I’m coming alive. It’s hard to express the experience to a non-theatrical person. People usually think I’m nuts.
Entertaining people is something that I find extremely enjoyable, whether that be making someone laugh, cry, sing or get up and dance.
In Australia, our school curriculum is state-based, meaning that it differs slightly between states and territories, but includes the overall Australian Curriculum.
The Victorian Curriculum and Assessment Authority, a state government organization that manages Victoria’s curriculum, assessment and reporting, states on its website that drama, dance and music are part of a student’s arts education from the earliest years in school until year 10.
‘The Arts enable students to develop their creative and expressive capacities by learning about the different practices, disciplines and traditions that have shaped the expression of culture locally, nationally and globally,’ the website says.
The curriculum means students must be taught the arts but it does not state that school productions, plays or performances are necessary. I believe that a school production is the best way to learn drama, dance and music as it incorporates not only those areas but also many others. Sets in wood-work and metal, costumes in textiles, interval snacks in food technology, programs and posters in media and even script writing in English could make it a whole school effort.
Not only does a school production incorporate a varied range of areas, it also offers many benefits to performers. Research has suggested that school attendance, reading comprehension, academic performance and self-esteem are all positively impacted by involvement within theater.
A survey conducted by the Australia Council for the Arts in 2017 found that in 2016, 65 percent of Australians aged 15 and older believed that the arts were an important part of a child’s development. The research also showed that the percentage of those between 15 and 24 who participated creatively in theater or dance increased from 17 percent in 2013 to 30 percent in 2016.
The statistics are extremely positive in Australia, though I wanted to contact an individual within the industry to gain an expert opinion.
Australian actor, singer and musical theater performer Rob Mills, currently performing in Puffs at the Alex Theatre in St Kilda, has a long list of professional credits, including starring as Danny Zuko in Grease, Fiyero in Wicked, Warner Huntington III in Legally Blonde and Sam in Ghost the Musical. He has also acted in numerous television shows.
Mills is a well-known name within Australian theater who grew up in a high school that didn’t offer these kinds of productions. Mills does remember his brother performing in Bye Bye Birdie.
“It’s sad to think they were phased/budgeted out of the curriculum,” Mills said.
Asked about his overall opinion on musical theater in high school, Mills said, “I think sadly it is a dying art form.”
It’s hard to believe that a professional believes his own field of work is disappearing, or is that necessarily the case? According to The Broadway League, a foundation dedicated to increasing the public’s knowledge and awareness of theatrical arts, there were 13.2 million admissions to shows on Broadway alone throughout the 2016-17 season.

It seems that education is where the attention needs to remain and increase, to ensure that future generations have a launch pad into the world of musical theater.
As a student active in theater, I know how special it is to be able to express myself and entertain others. I highly recommend getting involved with musical theater and advise anyone not to be fooled by the judgements of your peers.
Musical theater allows teenagers to grow in a supportive and entertaining environment. Hopefully our educational system will continue to recognize this.
The STEM (Science, technology, engineering, and mathematics) strategy may be helpful in our schools, but it’s missing one major area – the arts.

Jack Ward is a Senior Reporter with Youth Journalism International.