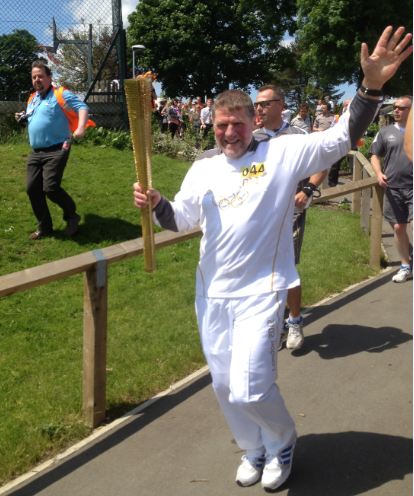 It was especially exciting because the school is the only one in the
United Kingdom to have the torch come through its grounds.
As part of the celebration, the school simultaneously played host to
the 2012 School Games, with two-time gold medallist Lord Sebastian Coe, the chairman
of the London Organizing Committee of the Olympic Games and Paralympic Games,
in attendance.
Although many students only saw the torch go past for a few seconds,
it will be a memory that will last for years to come.
In other parts of Richmond, people lined the streets to see the
torch, especially in the town center, where the English equivalent of vuvuzelas
were for sale, though they didn’t prove as annoying as they were during the
World Cup.
To great excitement and celebration, the crowds waved British flags
and also red, white and blue ribbons as the torchbearers went by through the Market
Place and on to the school, where they went through buildings and came down a
path to the sports fields.
The torch passed by crowds of students and teachers wanting to get
photographs before the bearers did a lap of honour round the sports field known
locally as Wembley. Then it headed on to the next leg of its journey.
However, before setting off to the next locale, the torchbearers and
guests had a chance to speak to some of the students, many of them asking for
pictures.
During this time there was the opportunity for students to show off
their talents in the performing arts, including a performance from dance students
and also some very talented music students busking in the car park.
The torchbearers all had reasons for securing the honor.
Helen Jackson, for instance, has done great work for years with
patients in her local hospice who are terminally ill.
Another torchbearer, John Hacking, has worked in a tough school
teaching physical education to students for the last 35 years. His students
describe him as a true inspiration.
Also getting the opportunity to carry the torch was Amy Potter, an
A-Level student who has suffered with cystic fibrosis since the age of 8. She
has also organized events to raise money for the Cystic Fibrosis Trust,
including an annual sponsored walk around the village where she lives.
The headmaster of Richmond School, Ian Robertson, said the school
was “very privileged” and proud of the chance to have the torch come through.
“It was a great day for all,” Robertson said. “ I was thrilled that
everybody could actually see the torch.”
That Coe was also there made it even more special, Robertson said.
Robertson said he was “thrilled to bits” to have Coe attend. “He’s a
tremendous role model for young people today and all people in terms of his
drive and his passion for sport, supporting schools and he was a favourite of
mine when he was a world champion.”
He said he is sure many students will “take lasting memories away from this,” including the chance to meet Coe and playing a part “in a once in a life time opportunity of the Olympics coming to Great Britain and coming to Richmond.”