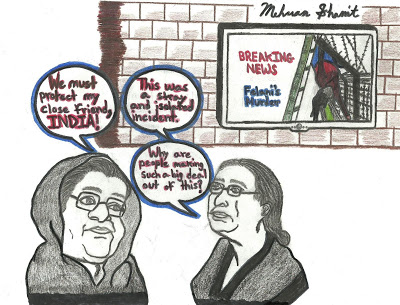 The drawing by YJI’s Mehran Shamit above depicts Bangladeshi Prime Minister Sheikh Hasina on the left and Bangladeshi Foreign Minister Dipu Moni, right.
TORONTO, Ontario, Canada – Felani didn’t have to die.Felani, a 15-year-old Bangladeshi girl, bled to death after Indian border guards shot her while she was climbing a barbed wire fence, trying to return to her homeland on January 7.
She and her father, Nur Islam, were crossing over to the Bangladeshi side from India, where she was living illegally for the past 10 years.
Her father first climbed up a ladder and jumped to the other side of the barbed-wired border fence, but when Felani climbed up and was about to jump, her clothes got tangled on the fence and she started screaming.
Soon the Indian Border Security Force spotted her, shot her and took away her innocent life. Felani’s father was able to escape, but Felani bled to death in 30 minutes. And, according to news accounts, during those last painful 30 minutes of her life, witnesses say that Felani cried for water.
None of the border security personnel came to help her while she was dying.
After about five hours, the border police tied her arms and legs to a pole and her body was given to Bangladeshi border guards the next day.
Felani was just an innocent Bangladeshi, but the border guards still mercilessly killed her. She might have been an illegal immigrant, but it still doesn’t give them the right to shoot her.
She wasn’t armed and didn’t try to harm anyone, but the border security still didn’t show the slightest respect for human life.
The barbed-wired border fence that India has nearly finished constructing has been the site of many more silent murders over the last decade and maybe even longer, making it one of the most dangerous borders in the world.
Indian border security guards have been indiscriminately shooting at Bangladeshis and more than 900 Bangladeshis have already been killed. There have also been reports of many types of harassment, including beatings, abductions and sexual abuse.
In many cases, Bangladeshis who had absolutely no intention of crossing over illegally to the Indian side were killed just for standing near the border.
It’s surprising to see that many Indian officials actually stand by the brutal actions of their border security force.
What’s even more surprising and disturbing is that Bangladeshi Prime Minister Sheikh Hasina is doing very little to persuade India to take responsibility for the crimes of its border patrol.
Hasina, who is known to have strong ties with India, must put pressure on India to prosecute those responsible for these human rights violations.
So far, she hasn’t been putting any light on this issue, but as the prime minister of Bangladesh, she needs to be in solidarity with her people. It’s about time she stops protecting India’s interests and starts bringing justice to the many Bangladeshis who have lost their loved ones because of the border patrol’s crimes.
The people who have lost their loved ones are very poor and don’t have enough money to go to court and fight for justice, and Hasina is taking advantage of these ordinary people.
India claims that the barbed-wired border
fence is there to protect its national security and prevent illegal immigration and smuggling. India also claims that Bangladesh, a neighbouring Muslim country, is a refuge for militant groups linked to Al-Qaeda and that the border will help prevent terrorists from entering India. According to a story published in The Sunday Times, a prominent London newspaper, India fears that Bangladesh could possibly be “a new Afghanistan.”
This is probably the most outrageous and ridiculous comment I have ever heard about my country, which is probably one of the most tolerant and peaceful countries in the Muslim world.
Being a Muslim and a Bangladeshi, I find it disturbing that India would consider Bangladesh as a safe haven for terrorists, just because it’s a Muslim country.
India needs to stop its hostile attitude towards Bangladesh and understand that just because Bangladesh isn’t as big and powerful as India is, it doesn’t mean that it’s going to tolerate inhuman crimes.
India should take full responsibility for the crimes committed by their border security force.
I hope that nobody will ever have to face another painful death like Felani’s.
Mehran Shamit is a Reporter for Youth Journalism International. 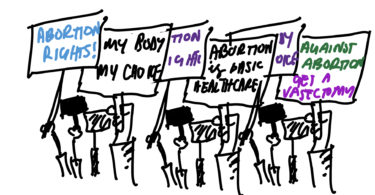