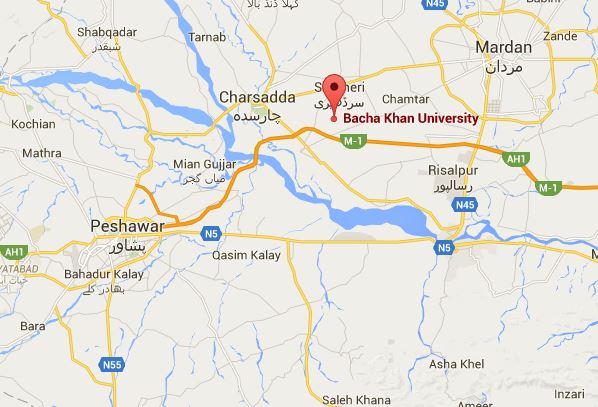 LAHORE, Pakistan – As I walked through the corridor of my university department today, a friend told me the shocking news that terrorists had attacked another university in Khyber Pakhtunkhwa.

I didn’t believe her. I called my mother, who was already listening to the news and she confirmed it.

This time it was Bacha Khan University in Charsadda, Khyber Pakhtunkhwa, in the northwestern part of Pakistan, not very far from the border with Afghanistan.

By mid-afternoon when I got home, news reports told of 19 martyred and more than 30 injured. Further, the reports said that the army had killed four terrorists while three escaped.

Fourteen months ago, more than 100 students were brutally murdered when terrorists attacked the Army Public School in Peshawar. Now this happened.

Before these two incidents, I never thought terrorists could attack students. This is really heartbreaking.

I am giving 60 percent of the blame to the terrorists and 40 percent to our leaders in the government of Pakistan.

Although 14 months back no one thought that this could happen, now it is too obvious. Since December 2015, every university was receiving threats, and what happened? Terrorists did what they said. Where are our leaders? They’re sitting and watching and are passing statements saying we are very sorry for those families.

Why is it that we students cannot feel protected? We don’t need new roads or laptop schemes. We just demand that our government provide security to all institutes, to protect us.

Our universities are filled with students who have spent 20 years of their lives to get a good education and fulfill their dreams.

Other students may have been there for the sake of their children.

It no longer matters which reason brought them to school, though, because their lives just ended in a few minutes of terror.

I accept that the fast response to the terrorists this time saved a lot of lives but still, many families – the final count is still unclear – are shattered with the loss of loved ones.

When will this terrorism stop? When will every person feel secure? I am still shocked and really sad.

Now every day when I go to university, I always think that terrorists could attack my campus, too. We are not safe here.

Until this latest attack, I used to listen to the songs made for the martyred students from Army Public School. The music gave me hope and courage that we could defeat terrorism, but now when I listen those songs or think about them, I feel that my leaders have disappointed us all.

The Bacha Khan families are mourning right now. They raised their children and dreamt about their bright futures. But today all their hopes and dreams died with them.

I hope our leaders will stop fighting for political power and instead start taking action, and spending money, on what we students desperately need: security.

Amber Shakil is a Junior Reporter for Youth Journalism International.