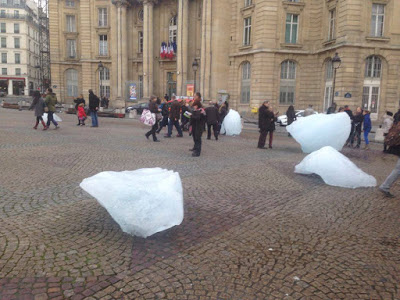 A
dozen large blocks of ice, taken from icebergs off the coast of Greenland, are arranged
in a circle outside the building.
Ice Watch, a work of sculpture by artist
Olafur Eliasson and geologist Minik Rosing, aims to highlight the detrimental
effects of climate change.
It was
installed last week to coincide with the United Nations Climate Summit in
Paris.

The
slow melting of the chunks of ice in front of the Parisian landmark mirrored
the melting of ice sheets from climate change.
The
circular placement of the ice blocks – in the same shape as a clock –
emphasized the urgency of tackling global warming.
In a
statement on the Ice Watch website,
Rosing, a professor of geology at the Natural History Museum of Denmark at the
University of Copenhagen, said, “Science and technology have made it possible
for us to destabilize Earth’s climate, but now that we understand the
mechanisms behind these changes, we have the power to prevent them from
growing.”
Visitors
are noticing the melting blocks of ice.
On Saturday afternoon, many were snapping photos and touching the installation.
According
to information released by the artists and their sponsors, the 80 tons of ice
came from free-floating blocks from a fjord outside of Nuuk, Greenland.
The
ice sculpture is part of the Artists4ParisClimate2015, which is working to use
public art projects to mobilize public opinion about climate change, according to
the Ice Watch website.
Whether
the intended message resonated among visitors and dignitaries, however, is anyone’s
guess.
***
Your tax-deductible contribution can help the students
served by this non-profit at:
www.HelpYJI.org