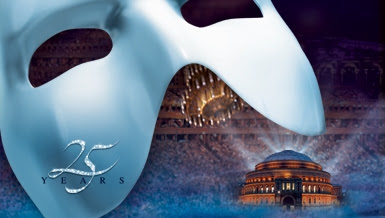 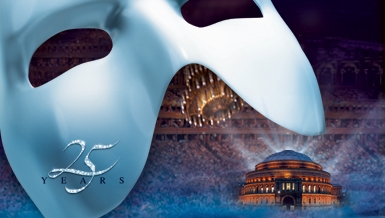 By Emily Couch
Junior Reporter
Youth Journalism International
LONDON, England – The 25th
anniversary return of the phenomenal best-selling musical Phantom of the Opera had to be one of the most anticipated
theatrical events in the last decade – and I was there.

In case you’ve missed
it, the Phantom of the Opera is the
story of a mysterious masked man in the depths of the Paris Opera House who
falls in love with a beautiful young soprano called Christine Daae.
The masked man is known
by all as the “Opera Ghost” and is the unseen master of all the goes on under
the roof of the Opera Populaire and thus the bane of the lives of the new
managers and prima donna, Carlotta Giudicelli.

Trouble starts when
Christine’s childhood sweetheart, Raoul Vicomte de Chagny turns up on the
doorstep and the two men engage in an epic battle to win her love.  Who does Christine choose?  I’ll leave that for you to guess.
Phantom
had its debut in Her Majesties’ theatre in London’s West End in 1986 when it
forged an unbreakable, intangible, magical bond with the audience that not even
the composer could explain.
The Music of the Night
has been enchanting audiences ever since.

For an avid “Phan” – the rather corny name ascribed to all those who
worship at the shrine of Phantom – the event was rather like being the
proverbial kid in a candy shop.
You end up staring around you in absolute awe not knowing whether to dig
into the scrumptiously stellar cast or the luxurious dark-chocolate-y set and
costume design.  So you end up gorging yourself on both.
Ramin Karimloo and Sierra Boggess led the cast as the Phantom and
Christine. The dynamic duo had recently starred together in Love Never Dies, the Phantom sequel, as their respective roles
so seeing them together in the original was a real treat.
They have an undeniable chemistry on stage which created an almost
tangible heat, which added to the already tropical climate of the Royal Albert
Hall.
Karimloo’s voice has to be heard to be believed. It has a remarkable
strength and power which makes it perfect for the role of the imposing and
omnipotent Phantom.
Sierra was a true angel of music. For me, she is Christine Daae
personified. I fell in love with her in Love
Never Dies, so seeing her perform in the original was a dream.
Her voice soared and dived through the music with her beautiful
coloratura shining through.  The operatic training she underwent for her
recent Broadway stint in Master Class
helped her voice to sound even more perfect for the young ingénue of the Paris
Opera!
Her finest moment was without a doubt her breathtaking rendition of
“Wishing You Were Somehow Here Again.”
What I would give to be able to sing like her!  It is abundantly
clear why Andrew Lloyd Webber chose her specifically for first Phantom: The Las Vegas Spectacular then Love Never Dies and now Phantom 25th.
These celebrations firmly established her as a star of the West End as
well as Broadway.
As for the chorus, well, they were the cream of the West End. Stars included
Sofia Escobar, Robyn North, Simon Bailey and Earl Carpenter, among many
talented voices.
“Drink it in, drink it up, ’til you drown in the lights in the sound…”
the line from Masquerade is an apt
way to describe Phantom’s phenomenal
set and costume.  The creative team did an admirable job of recreating the
set in the Albert Hall.
If one were to be picky, the signature chandelier crash was missed but
the fireworks did compensate somewhat.
Jon Driscoll, who seems to have the monopoly on the projections of West
End shows, did a great job of transferring Maria Bjornson’s set design onto a
screen.
Fittingly, the costumes were all done to Maria Bjornson’s beautiful
designs. I’m sure she would have been proud to see her masterpieces celebrate
their 25th year.
The cherry on top of the afternoon was without a doubt the finale and guest
appearances.
Despite tears streaming down my face through out, I don’t think it was
possible for me to enjoy it more than I did.  I am not the easily
“gob-smacked” sort but I must say my jaw did drop a few inches when Lord Lloyd
Webber made his appearance.
I found out that, yes, he really does breathe the same air as we mere
audience members.
Seeing him join Cameron Mackintosh, Gillian Lynne and Charles Hart on
stage was surreal. I could not believe it when Sarah Brightman came center
stage (adoringly introduced as “My Angel of Music” by Webber) and sang “Phantom
of the Opera” with John Owen Jones, Colm Wilkinson, Anthony Warlow and Peter
Jobak.
I wished my ears and eyes could record that truly beautiful moment!
All in all, Phantom
25 was an unforgettable experience. I want to say a massive thank you to
Andrew Lloyd Webber for creating such a magnum opus of musical theatre.
I think we can safely say that contrary to the Phantom’s
line in the final lair, the Music of the Night is not over, it is only just
beginning.