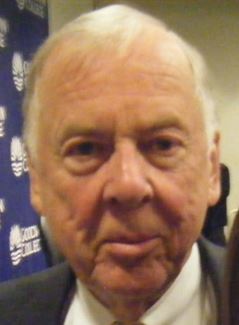 EAST HARTFORD, Connecticut, U.S.A. — The recent catastrophic oil spill in the Gulf of Mexico “provided a clear reminder of the fact that our nation needs to develop safe methods for drilling and more importantly, start diversifying our nation’s energy sources,” one of the country’s most powerful congressmen said.

“We can no longer stand idle as we continue to export American dollars for foreign oil,” Larson told Youth Journalism International recently.

Pickens said politicians have been promising solutions for years, saying they will start to use alternative energy sources, but the country keeps buying foreign oil.

“Natural gas is cleaner, it’s cheaper and it’s ours,” Pickens said. “Why aren’t we using it?”

“America’s had no energy plan” for years, Larson said during a forum at Goodwin College in East Hartford. 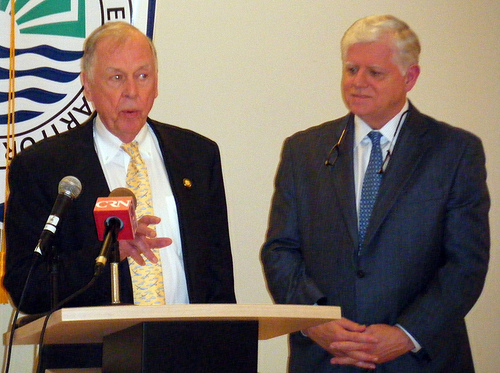 Larson, the fourth-ranking Democrat in the U.S. House, said he strongly supports the “Pickens Plan” to use the abundant natural gas reserves in America to replace the use of foreign oil. The U.S. Senate recently endorsed it as part of a proposed energy bill spurred by the BP spill off the coast of Louisiana.

The measure pushed by Pickens “is something that all of America needs to embrace,” Larson said.

Because there is a limited supply of oil, “we will be accused of being the ones that run the oil price up,” Pickens said.

Using more natural gas and wind power instead of depending on foreign oil would save more than $230 billion a year, he said.

Half that money that now goes to many countries that often oppose American interests, Pickens said.

Pickens said that adopting his plan “will get us out of the trap that we’ve put ourselves in.”

Since natural gas is about $1 per gallon cheaper than oil, Pickens said, it makes sense to use America’s vast reserves.

A big part of the Texas billionaire’s plan is to use natural gas to power the nation’s 7 million 18-wheeler trucks.

Pickens said he has met with many leading politicians, including President Barack Obama, to talk about his plan.

He said their first choice for alternative energy would be to rely more heavily on batteries.

However, Pickens said, batteries and most other options are not strong enough to move a large truck.

Natural gas is the only resource besides oil that is capable of doing the job, Pickens said.

Pickens said he supports the idea of using batteries for “light duty” vehicles, but he wants to use natural gas in heavy duty transportation.

Creating the infrastructure to allow wide use of natural gas for trucks is “somewhat insignificant.”

Larson said that switching one 18-wheeler truck to natural gas is the equivalent of switching about 320 cars.

A bill backed by Larson would increase the use of natural gas in heavy duty vehicles by providing tax credits and incentives to people who buy them.

In five to seven years, Pickens said, the change would cut oil imports in half.

Both Pickens and Larson said the proposal would help the environment because natural gas is somewhat cleaner burning than oil, which contributes to air pollution.

Larson said that preserving the environment is “a national security issue.”

Burning so much oil “has got to end,” Larson said.

The congressman said that making the necessary changes all cost money. He said the nation has to choose whether to invest in America or to continue to send its wealth overseas.

Pickens said he feels strongly about making sure that his plan actually happens.

“My mission is to get this done,” he said. “We will be successful. It will happen.”

Clare Hern is a Senior Reporter for Youth Journalism International