WEST HARTFORD, Conn., U.S.A. – Throughout the 1900s, the day off for women laborers in South Africa was typically called ‘Sheila’s Day.’ Every Thursday, black women of the community would gather together to discuss issues dear to their hearts, sing, and celebrate their individuality. White bosses would often refer to their women workers as “Sheila,” instead of learning their given African names. 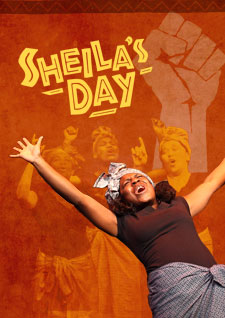 The Hartford Stage presentation, “Sheila’s Day” was named after this important day because it symbolizes both the attitude of the white people in the community that all blacks are the same, and not having the individuality of separate names, as well as the attitude of the blacks who are making the best of their oppression and then rising up to challenge it.
This play was chock full of emotion and traditional music. The actors felt so strongly about the issues and the music that they began to cry onstage. The scenes transitioned very well from America during the civil rights movement, to South Africa during apartheid. One of the reasons it transitioned so smoothly was because of the minimalist props and costumes. The set consisted of three black blocks, and traditional instruments that were used often.
The play would have been nothing without the incredible music which ranged from traditional African song to Christian spirituals. The power of the songs gave us goose bumps.
Thuli Dumakude and Tu Nokwe, especially, made an impact with their voices. But the entire cast was phenomenal. They worked very hard to connect on an emotional level with their characters, and that made it a much more personal and enjoyable experience for the audience.
The actors all wore black t-shirts and pants, with a traditional African fabric draped around them. Every actor had a different way of tying their cloth and head wrapping. This gave them both a sense of individuality, as well as unity. The simple costumes also let them transform into different characters as the need arose. There were 10 actresses, and they portrayed at least 20 different people, from a freedom rider, to a rich white housewife.
“Sheila’s Day,” the season opener for Hartford Stage, is a production of the New Jersey-based Crossroads Theatre Company. It runs through August 15 at the Roberts Theatre at Kingswood-Oxford School in West Hartford, Conn.
With its next production, “Antony & Cleopatra,” which opens October 7, Hartford Stage returns home to its renovated stage on Church Street in Hartford.