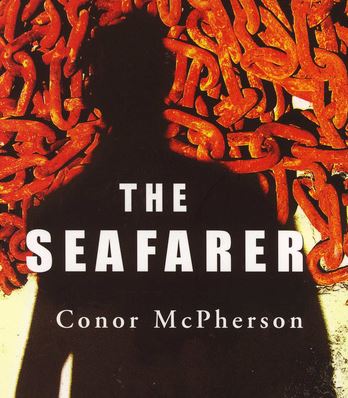 HARTFORD, Connecticut, U.S.A. – A card game is slow and drags in the beginning. It can be boring, humorous and sometimes surprise you.
The same can be said about The Seafarer, an unusual play showing at TheaterWorks in Hartford.
Written by Irish playwright Conor McPherson, The Seafarer will make you realize how detrimental drinking really is.
Sharky, Ivan and Richard (Dean Nolen, John Ahlin, and Edmond Genest) are just three hung-over Irish losers that like to play poker. But when Christmas Eve rolls around and Satan (Allen McCullough) comes a calling, it’s not to sing carols or deliver eggnog.
“Mr. Lockhart” lost a game of cards to Sharky, the underachieving leader of the group, long ago. But the Devil never forgets and he’s back, eager for a full house – of souls.
The first 45 minutes of the play featured the three hopeless alcoholics in full form. After a long night of hardcore drinking, all they are able to do is hobble around while babbling and arguing about arbitrary matters. Swearing is in abundance.
After a Christmas shopping trip that lasts the whole day, the gang returns to find that an old friend, Nicky (Chris Genebach), has popped in along with Mr. Lockhart, the Devil in disguise.
The group agrees to play a game of cards after the Devil confronts Sharky, reminding him of their previous fateful meeting. Horrified, Sharky agrees to play, though he is completely unsure of the outcome.
As random as its name, The Seafarer contains irrelevant, though intriguing parts that draw away from the main point of the story, if there is one.
Characters constantly go off on a tangent and when they finally return to the story, the play becomes boring. The boring factor can be explained by the fact that the characters are boring people who do boring things.
The most exciting part of the story is when the Devil reveals himself to Sharky. A whoosh of air can be heard as the lamps are put out and the stage is lit with an eerie blueish glow. The Devil toys with Sharky, scaring and confusing him to the point that he can’t breathe. But even this scene only lasts a few minutes.
Nolen ably portrayed the flat, boring, senseless character of Sharky. If this actor is not naturally boring, then bravo!
Genest is extremely believable in playing a loony, blind, alcoholic and Ahlin is a fat, nearsighted, over-the-top, and thoroughly lovable Ivan.
And as for McCullough? He really is the Devil.
The Seafarer runs through December 28.