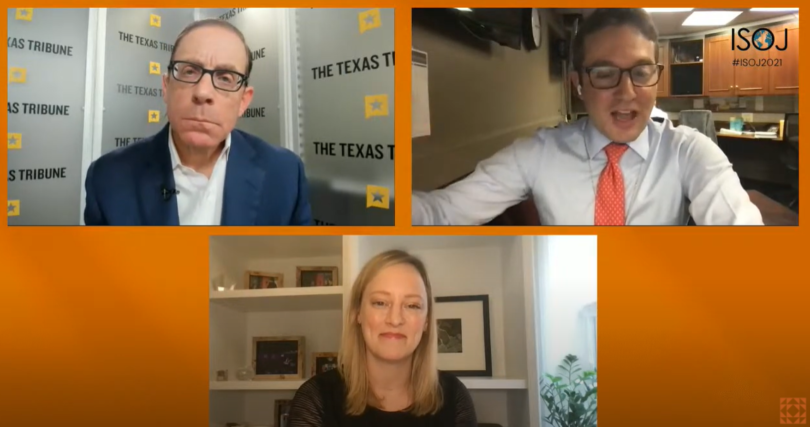 A screenshot from the Punchbowl keynote at the International Symposium on Online Journalism.

Bogotá, COLOMBIA – With inside access to Capitol Hill, reporters Anna Palmer and Jake Sherman, along with other partners, created Punchbowl News, a new media startup focusing on daily newsletters and a podcast, during the pandemic with the goal of showcasing the politics of governing and the leaders of Washington.

Palmer and Sherman are both former Politico correspondents and co-authors of the 2019 book, The Hill to Die On: The Battle for Congress and the Future of Trump’s America. They spoke about covering politics with Texas Tribune co-founder Evan Smith at the International Symposium on Online Journalism.

When they created Punchbowl News early this year, Sherman said, they wanted to create conversation around content.

“We were trying to provide context for anybody that touches government, whose business is government and people who are actually in government,” said Palmer. “Around the North Star: Power. People. Politics.”

Punchbowl launched during the pandemic in January 2021, allowing them to think about community in a very different way than most traditional news organizations said Palmer.

Palmer said they are interested in reader and audience feedback, since those people are often their sources and sponsors.

“There is a real false conflict between profit and being able to be a good journalist, being able to put out a product that is of the highest standard,” said Palmer, later adding that while Punchbowl has advertisers, it relies on premium subscribers as the heart of the organization.

They debated the morals of making journalism content free or paid, and, if paid, in what manner.

Smith stands on the non-profit side of the argument, contrary to Palmer and Sherman’s organization.

“You can’t accomplish a public service behind a paywall,” said Smith.

Sherman defended the concept by illustrating that journalism is a public service even if it’s behind a paywall, as it still informs the larger political debate and influences the public debate.

As for the criticism that journalists give a platform to people who don’t deserve one, Sherman said he doesn’t choose national leaders. A reporter doesn’t make the news, according to Sherman, but covers it.