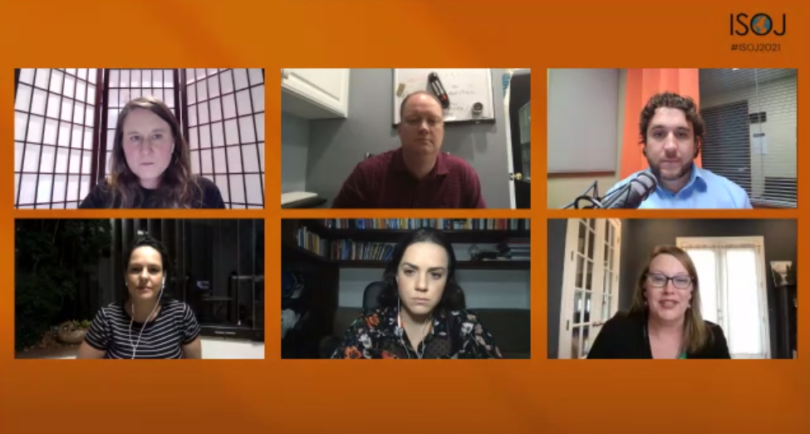 Screenshot from a technology and misinformation panel of the International Symposium of Online Journalism.

Pekin, Illinois, U.S.A. – We live in a world full of misinformation waiting to grab us, and that’s the easiest way to put it, panelists told an audience of journalists on Tuesday at an international conference.

Professors and researchers from various universities took aim at misinformation by serving on a panel at the International Symposium for Online Journalism, discussing challenges of the digital evolution from algorithms to misinformation.

This conference attracted over 6,000 journalists from around the world hoping to learn more about our modern technology within social media.

The speakers, hoping to inform journalists to prepare them for future work, discussed artificial intelligence, the pending issues of paywalls, the use of demographics for the better, and the threat of “zombies” redefining the news culture.

Researchers Silvia DalBen and Amanda Chevtchouk Jurno from the Federal University of Minas Gerais in Brazil, explained the research study they conducted about how online artificial intelligence is helping journalists and the media.

They explained two kinds of technologies that are being used on Twitter, the Fatimbot and the Rosie DaSerenata.

“The Fatimbot monitors Twitter’s feed every 15 minutes and publishes a reply every time it detects a tweet spreading a biased news link,” said DalBen.

This online phenomenon then sends a link with verified reliable information to the user who engaged in a biased news link.

DalBen and other proponents of the Fatimbot hope this technology’s intelligence in the Twitter world will help end the spread of misinformation and better inform society of its dangers.

Jurno then explained the Rosie DaSerenata and how it helps fight corruption.

“In Brazil, Rosie DaSerenata publishes an alert every time it finds a suspicious expense” by Brazilian elected officials, according to Jurno.

This technology is now helping federal authorities in the fight against misinformation, Jurno said.

DalBen and Jurno clarified that these artificial intelligences do not define the journalism world. Instead, it saves time for journalists to involve themselves in roles that cannot be automated.

Professor Amber Hinsley from Texas State University spoke of how demographics influence the identification of bias and fake news.

“The modern world relies on news cues,” Hinsley said, such as the URL, author, and date. “These news cues help persuade a reader to find out more information on a subject matter they were reading.”

While misinformation does blind our eyes, our psychological instincts also play a role.

Hinsley explained how confirmation bias affects us all.

“We favor information we already believe and know over new information that is easy to mistrust,” Hinsley said.

The use of our abilities to seek out misinformation, as well as our pure innocence in doing so, has a big impact on the future of news media.

Panelists seemed to say that since the media caters to what we like and read about, it devours us more than we already know.

Their discoveries were interesting.

The decline of free accessible websites without paywalls has seen devastating effects around the world.

“Zombie websites seem to be taking over the web,” said Funk. “A zombie is an un-updated website that automatically directs users to a foreign site. This is a pure attack on local community news, as the losses are inevitable.”

While the information each professor discussed at the panel appears to be frightening for the future of news and journalism, they left the panel with some hope.

DelBan and Jurno, who said technology is not neutral, are seeking to empower people to use the positive side of technology to combat the negative effects of the future of misinformation.

Hinsley said, “Sometimes my and your voice will not make a difference in the world of fake news, and that’s the hardest thing to comprehend.”

Speakman and Funk reevaluated the results of their website study.

“Journalism is not just about making money,” Speakman said. Funk and Speakman, who reinforced the idea of how helping local communities find their voice, elaborated on how in a world of national issues, it is important to protect the future from misinformation.

During the closing question and answer period, an audience member asked if artificial intelligence and robots will eventually replace journalism and the news industry.

Jurno assured the audience that no, artificial intelligence will never take the place of journalists. Instead, people working in journalism need to prepare the present for the endless possibilities of the future in misinformation and fake news.