Aurora, Nebraska, UNITED STATES — It isn’t uncommon for schools to ban the use of cell phones during school hours.

But this semester, a Nebraska high school principal made the rule even stricter.

At Aurora High School, cell phones are banned in any sort of school activity — including after school practices and even during sports games.

While the ban of cells phones has been common in the school for at least several years, the recent initiative comes weeks after school authorities searched student backpacks and pockets of students during the school day for the contraband items.

Principal Doug Kittle followed this by issuing an unofficial statement the next morning in the announcements proclaiming the new rules.

It wasn’t a popular decision.

“Most kids have cell phones because their parents want them to have it for when they go home, like if something happened to them they want to keep in touch,” said sophomore Amanda Davis, who opposes the new rule.

She’s not the only one who doesn’t like it. 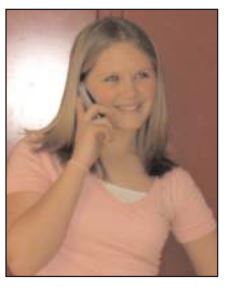 Aurora, Neb. freshman Janet Morris, 15, poses by a locker with her contraband cell phone, an itemthat due to the school’s new rules could get her in trouble. (Zach Brokenrope/YJI)

“I drive to school,” said Morris, “and my parents don’t let me out of the house without my phone.”

Kittle recently said that if two more cell phones are found on school grounds, a ban on hooded sweatshirts would take place in the school.

To some students, a sweatshirt ban is even more outrageous than the cell phone ban..

“It’s hypocritical,” Morris said. “The school sells hoodies! I mean, I understand that they don’t want kids to hide them in them but are they gonna ban pockets on pants, then, too?”

But Linda Simmons, who is the secretary at Aurora Middle School and also a parent, supports the ban.

“School is not a place for cell phones,” said Simmons, “and at other school-related things, they should be left in the car.”

“When you need them, go out and get it, but during the school day if you need to get a hold of your parents, the office has a phone you can use,” the school secretary said.

But not all parents agree with the school secretary. Some wrote letters to the school board or to the local newspaper out of concern over the sudden restrictions.

“It came out of nowhere,” junior Marissa Schamle said.

Before the ban, Schamle said, the school “pretty much had a ‘don’t ask, don’t tell’ policy” towards cell phones.

“Now they are watching us like hawks,” Schamle said.

Zach Brokenrope is a Reporter for Youth Journalism International