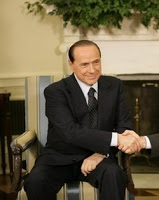 By Eugenia Durante
Senior Reporter
Youth Journalism International
MILAN, Italy – Protest is in the air as Valentine’s Day approaches, instead of love.
All around the world we see protests rising, sometimes with dramatic implications, as in the case of Egypt. All around the world people are fighting against injustice, claiming their right to a democracy, to dignity and freedom.
It is really painful to me to see that my country represents an exception, or at least most of it does.
If I go abroad, people look at me with a sort of pity because of what is happening in my country.
The grim Italian reality is becoming more and more reality show-like.
Every day Italian newspapers write about the sexual scandals which involve Prime Minister Silvio Berlusconi, who is actually under investigation for aiding and abetting juvenile prostitution and graft.
Even if Berlusconi attacks the magistrates, affirming that there is a sort of communist plot against him, it is not the first time that he has to face a trial: among the others we remember are many trials for fraud, some of them involving Berlusconi’s network company Mediaset.
Once again, Italian politics has assumed a grotesque look, resembling more and more the programs which fill Italian television. Maybe this has nothing to do with Berlusconi owning and controlling many of Italy’s broadcasting companies.
What supposedly happened in our prime minister’s villas is just a duplication of what happens in some Italian programs where it is more important to have a beautiful body and to show it naked, than to have a smart mind.
Berlusconi’s passion for women’s bodies (for he’s not interested in any other aspect of them, surely) is not a novelty, but this time he has to face the fact that some of the girls who joined the parties often held in his villas were underage.
Although nothing has been completely proven yet, some of these girls admitted that they have been paid for joining Berlusconi’s parties and for having sexual intercourse with him.
Some people claim that private life should remain private, even if we’re talking about a prime minister’s life. But what if private choices turn out to be illegal?
As a student and a woman I feel ashamed of who is supposed to represent me and my country.
What’s the point of studying, going to university, reading, going to movies, talking and debating, if  appearing smiling and semi-naked on a television screen turns out to be more profit-making than all of these sensible actions?
The point is that I, and many women like me, have dignity, and I don’t want even to think that the reality is what they want us to accept.
I don’t believe that men like Silvio Berlusconi are the majority. I don’t want my body to be a means to become rich and famous.
I feel disgusted. I want my country to be a place where I’d like to live and grow.
I don’t want to be a part of a shameful, pathetic reality show anymore.
********
Youth Journalism International’s annual journalism contest is underway.
See www.YouthJournalism.org for details.