As a young conservative involved in politics, it doesn’t get much better.

There are a lot of characters running for the Republican nomination, and even with as much criticism as we get from the Democrats, I really like the personalities. President Ronald Reagan was a personality, and he did all right for himself.

It’s not a “clown car,” as the media will try to tell us. The Republican candidates are a group of passionate individuals, who want to “Make America Great Again.” And that was not a Donald Trump endorsement.
Two years ago, New Jersey Gov. Chris Christie won re-election in a crushing victory, and was the front runner for the GOP nomination. He was moderate, yet such a straight talker he could garner enough conservative support. But then there was some issue with a bridge and well, you know the rest.
After Christie sputtered out, a man with a familiar last name rose out of the ashes, and once again, we were looking at possibly a third President Bush.
Jeb, Jeb, Jeb. What can I say? Jeb Bush certainly does not have the charisma of his brother, President George W. Bush. 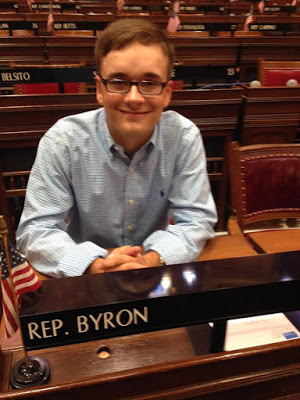 Max Turgeon visits the chamber of the Connecticut House of Representatives, trying out the desk of Rep. Gary Byron of Newington. (YJI)

He is a lot like his father, a kind of awkward, yet smart man. But the father, President George H.W. Bush, was able to connect to people on a personal level.