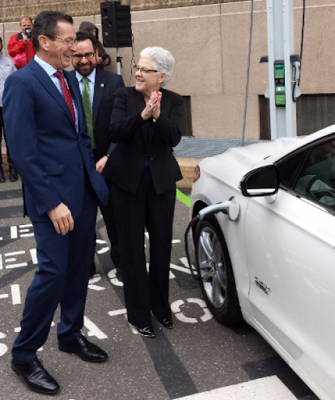 Hartford, Connecticut, UNITED STATES – The international climate accord reached earlier this month in Paris is good news for the economy and the planet, said Environmental Protection Agency Administrator Gina McCarthy.

“There’s all economic opportunity if we do this right and take action,” said McCarthy, speaking to a crowd of reporters, state workers and onlookers in Hartford Friday afternoon.

Clean energy, she said, represents “the jobs of the future.”
McCarthy, who was part of the U.S. delegation at the international climate change conference in Paris, said she believes “the U.S. is leading again” on climate change.
Developing countries, she said, can “skip over” fossil fuels and instead benefit from clean energy systems like solar and wind.
“If you look at India, which is extremely challenged in terms of the amount of poverty they’re facing, the advantage of having solar and renewables as a base of support for your energy system is that you do not need to build the kind of infrastructure that this country had to build,” said McCarthy, to bring energy to people.
Generations ago, the U.S. built a huge infrastructure – roads, pipelines and power plants – to convert fossil fuel to energy and get it to where it was needed.

But today’s alternative energy systems don’t require so much – or the decades to recoup the investment, according to McCarthy. 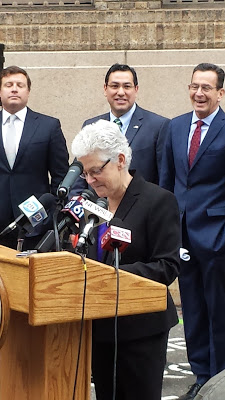 Gina McCarthy talks about the Paris climate change agreement on a stop in Hartford. (Kiernan Majerus-Collins/YJI)

“Renewables will provide them with opportunity to not just heat their house and bring electricity, but to purify their water,” said McCarthy. “There are ways in which there are advantages to the new technologies of today that should allow them to raise their country out of poverty.”
It’ll be similar to what happened in the U.S. years ago, she said, but with “different tools and practices.” Some of the new methods are better and more sustainable than anything available years ago, she said.
McCarthy said it wasn’t just “pin-headed bureaucrats” like her in Paris, but plenty of people from the private sector eager to jump on new business opportunities in energy.
McCarthy praised Connecticut Gov. Dannel Malloy for his efforts to combat climate change in the state.
The only reason the United States could get the climate deal done, McCarthy said, is because of “leadership in Connecticut and other states.”
Malloy detailed Connecticut’s climate efforts, including “400 charging stations” for electric vehicles across the state.
“Climate change is happening. Make no mistake about that,” said Malloy. And, he said, “Connecticut is leading.”
McCarthy also credited U.S. President Barack Obama for making the issue a priority.
“I have great support and tremendous leadership from President Obama,” said McCarthy.
Asked about Republicans in Congress who reject climate science, McCarthy said the world community is with her and Obama.
“People have been dying for leadership to turn that science into action,” said McCarthy. “If you went to the conference there were no climate deniers.”
The international community – 190 countries in all – joined together in Paris to confront the problem of climate change and try to forge a solution, according to McCarthy.
She named North Korea and Syria among the nations that didn’t sign the accord.
And she made clear that the Obama administration would be moving forward with their plans despite congressional opposition.
“The president gave his best shot at getting this through Congress,” said McCarthy. “We don’t feel that we need Congress to take action.”
Kiernan Majerus-Collins is a Senior Reporter for Youth Journalism International.
***
Your tax-deductible contribution helps students
served by this nonprofit:
www.HelpYJI.org