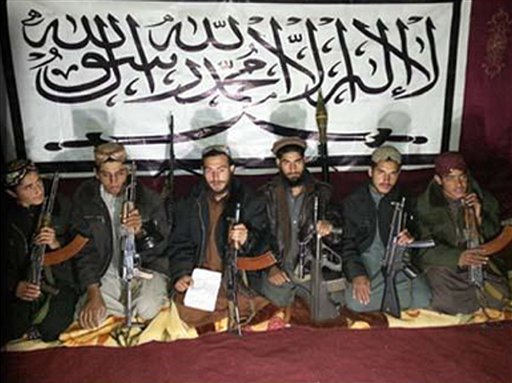 Pakistani Taliban released this photo of the terrorists who attacked a school in Peshawar.
LAHORE, Pakistan – Children are the angels of heaven. They are innocent little flowers, their smiles can soften even the coldest hearts. That is what I knew and believed to be true, but today’s heinous event has turned everything upside down.

The Taliban attacked a school in Peshawar and the result is more than 130 students dead.
This is no terrorist attack. It’s an attack on humanity, it’s an attack on myself.
I would say the Taliban have crossed limits but they have done so a long time ago. I can’t imagine how a single person could be so brutal, so cruel and so barbaric that they crossed all limits and reached somewhere I cannot even say they are human.
Ever since the war on terror started, people have been saying that the Taliban are not Muslims, they follow no religion, and Islam or any other religion does not allow brutality.

But today they’ve settled it, the fact that they have no humanity left in them is beyond a shadow of doubt. I don’t know – and I am afraid to think of – what might they be thinking when they so easily killed the students.
Do they even think of what they are doing?
My eyes are as clouded as my brain as I try to type on my computer. Every time I think of a single student in the school, my eyes fill with tears, and my heart with gloom.
My heart seems to burst through my chest as I think of the parents, teachers, and students. A few weeks back, I was reading a news story about a school shooting in the U.S.A., and I thought, “God, that’s horrible. How could someone be so cruel? Pakistan is hampered by terrorism, but thank God gunmen don’t just walk into schools and start shooting.”
And here I am, my eyes glued to the television, filling up with tears and drying again, becoming wet with tears again and again. When I go to study, I can’t get my mind off of my brothers and sisters, they are my own and they are suffering losses that no one should ever have.
They are students, just like me and their parents are all the same. Their names should be on attendance registers, but their parents are searching it on lists of the dead published by the hospitals. Those who escaped alive are severely injured not only physically but having endured a horrible day at school that will torment them all their lives.
I can’t help but imagine the horror they faced, watching their schoolmates taking bullets to their chests, watching their school staff fall down one by one, and their teacher set to fire in cold blood. Just one of these is enough to shake one from the inside out and what those children and their loved ones are going through is beyond comprehension.
This is no ordinary terrorist attack, it’s far beyond that. They have ripped our souls apart and a fire is burning in me to avenge the blood of those beautiful children whose smile meant the world.
I saw something in my Facebook newsfeed in tribute to one of the victims that said, “Our smile is much stronger than your gun.”
The Taliban say it was a form of revenge toward the parents of those children …  and that is the worst thing of all. What was their fault? There were more than 100 innocent children who went to school like any other day but never to return. Maybe our wounds will heal in a few days or weeks, but what of those mothers who prepared their children for school and awaited their return?
We mourn this situation united as a nation. I hope we remain united in the efforts to eradicate this earth from the depravity of the Taliban.
Arooj Khalid is a Senior Reporter
***
Your tax-deductible contribution can help support this nonprofit at
www.HelpYJI.org