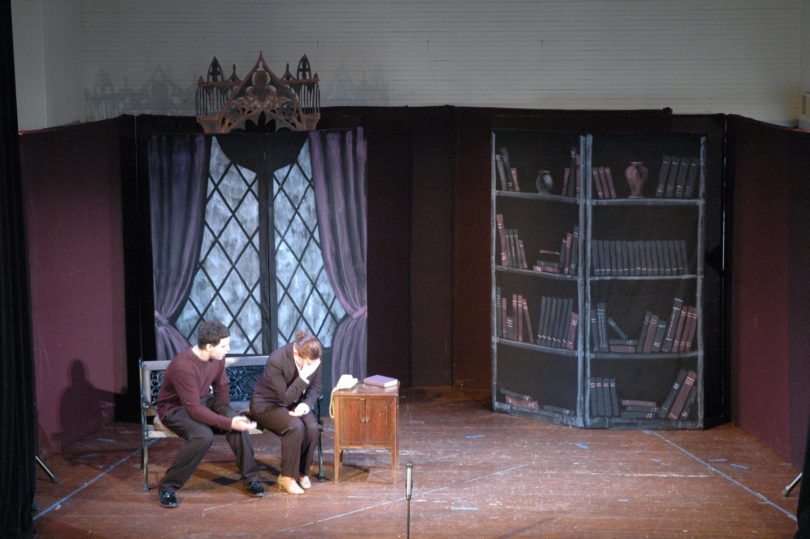 Rachel Freedline, a student in Maine, acting in a play at her high school in Hiram. (YJI)

HIRAM, Maine, U.S.A. — In the spotlight at Sacopee Valley High School in Hiram, Maine is senior Rachel Freedline, who’s had roles in four of her high school musicals.

As a 14-year-old eighth grader, she played Bloody Mary, a native souvenir dealer on the mysterious island Bali Ha’i in “South Pacific.”

She had a minor role in “Damn Yankees” as a freshman, but then took the leading role of Kate in “Kiss Me, Kate.”

Freedline first took the stage as an elementary school student.

“I went to acting camp in fifth or sixth grade and we had a performance at the end and we all did monologues,” Freedline said.

Her first audition, though, was as an eighth grader for the World War II-era romantic comedy “South Pacific,” the first musical Sacopee Valley High School had ever performed.

According to Freedline, she was nervous and doubted that she would get a good part. Imagine her surprise when she got the part of Bloody Mary!

With confidence after snagging so many major roles at Sacopee Valley High School, Freedline next tried for a role outside of her high school.

“My first audition outside of school was very nerve wracking and I didn’t even get a callback,” Freedline said. “I was disappointed, but you have to just learn to live with the rejection.”

To those trying out for their first part, Freedline advised them “to not have any expectations and put themselves completely on the line and be crazy and spontaneous, because that is what acting is all about.”

Singing and acting are major interests in Freedline’s life. She is undecided about what university she would like to attend after she graduates in the spring, but she said she knows she wants to study voice and music or theater.

Born in Rhode Island, Freedline moved with her family to Maine when she was a young child. Her father died while she was little, and Freedline said she doesn’t remember much about him.

It was hard growing up without a father, Freedline said, until her mom met another man. Even though Rachel was a little uneasy about her mom remarrying she’s adjusted, she said.

“I was a little apprehensive about my mom remarrying, but I love the man she chose as if he was my blood father,” said Freedline.

Freedline appreciates attending a comparatively small high school because she can be involved in so many activities.

“My high school experience has been unique in that I go to such a small school I’ve had so many opportunities that kids in bigger schools don’t get,” said Freedline. “If I went to a huge school I definitely wouldn’t have made the field hockey team.

“That’s the same with music and drama productions,” Freedline continued. “I’ve had a lot of opportunities for big parts, whereas in a larger school I probably wouldn’t have had those opportunities. I really wouldn’t say that anything was horrible. High school is just high school and I try not to let it be too crazy and dramatic.

“Junior year was definitely my hardest year so far,” Freedline went on. “I had a tough course load and a lot of extra curriculars, and trying to balance everything was definitely stressful.”
Freedline said she wants to leave Maine for college, but not the East Coast.

While people in Maine are friendly, the weather usually nice, the air fresh and the water clean, small town life – far away from malls, stores, theaters and amusement parks – can get boring, according to Freedline, “unless you like walking in the woods.”

But she knows there are advantages to small town life, too.
“I really like the fact that our school is so small and everyone knows everyone,” said Freedline. “It feels really homey and I think I’m going to miss that a little bit when I go to college.”

Sebastianne King is a Reporter for Youth Journalism International.