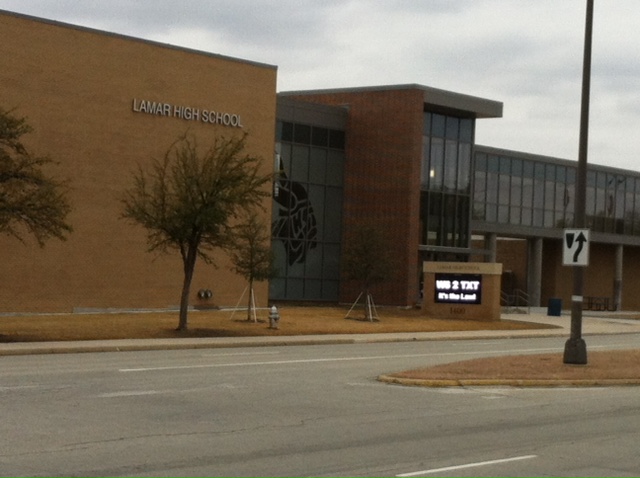 By Natalie Tarrant
Junior Reporter
Youth Journalism International
ARLINGTON, Texas, U.S.A. – We were in the middle of first
period, about 9 a.m., and reading aloud the first pages of Romeo and Juliet, (Act 1, Scene 1: “Do you bite
your thumb at us, sir?/ I do bite my thumb, sir.”)

Just
then, a voice from the intercom announced: The lockdown drill had started.
Our teacher gathered us up into a little group (it was a fairly
small class) and put us in a corner of the room away from the door. She covered
up the door’s window with some paper and sat down with us.

After that, we managed to stretch out into more comfortable
positions, whispering quietly to one another in a relaxed way. I even managed
to lie down and take a quick nap.
So basically I didn’t know how much time had passed, but the
lights were kept on and the teacher herself was even joking in a hushed voice
with the class.
After a while, I got kicked in the back by the girl next to me
and told to sit up. When I asked why, she said that someone, somewhere, had a
gun.
The rest of the class heard this and instantly broke out into an
almost synchronized groan.
I looked around at everyone to see if they were joking, but they
weren’t. A couple of kids got out their phones. Even more did some impressive
army crawls under the desks to their backpacks for food. At the worst, the
whole room seemed no more than slightly annoyed by the whole thing.
Here’s what we were hearing at first from a teacher – that three
armed men had broken into our school. That turned out to be wrong. In reality,
a student had told a school security officer that he heard another student might
have brought a gun to school.
We could hear the muffled sounds of helicopters buzzing
overhead. We heard cops walking down the hallways with radios reporting every
single thing. And we were on twitter joking about it.
Phones were passed around with pictures of Lamar from the
outside surrounded by police cars. People swapped stories of past lockdowns
(which, they said, were waay scarier and waaay cooler
than this one), shared food, and texted their friends in other rooms.
After about three hours, the biggest complaint was our lack of
bathroom breaks. I found out later that some other classrooms had allowed kids
to go into a closet so they could pee in a cup – yet another thing joked about.

Our teacher was kind enough to allow the phones, and we were
told to keep any talking down to a dull roar.
In our three-hour lockdown, the mood of the room shifted from
somewhat bothered and uncomfortable to sleepy, to silently giddy, and back to
just plain uncomfortable. When the principal himself looked in and told us it
was okay, everyone was on their feet in a second, bolting for the
restrooms.
Editor’s
note: Authorities found no one with a gun, or any gun, after searching the
school, and students were released.