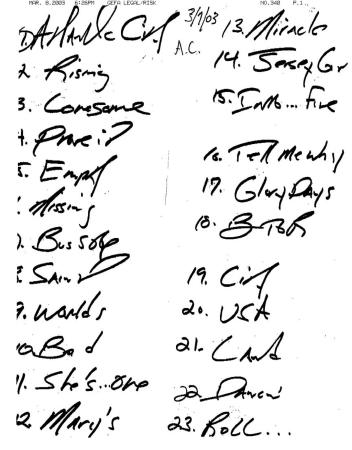 ATLANTIC CITY, New Jersey, U.S.A. — The city known for casinos and Donald Trump opened its doors on March 7 for rock legends Bruce Springsteen and the E Street Band.
This highly-anticipated event — the first time “The Boss” has headlined Atlantic City ’s Boardwalk Hall — proved a true Jersey-style house party, and left fans in awe.
Springsteen and the band took the stage to the graces of the ‘Miss America ’ theme, starting the night out on a light and humorous tone.
They opened with a powerful version of Springsteen’s 1982 song “ Atlantic City ,” extending the song’s climax to the delight of the sold-out crowd.
Springsteen next launched into two songs of his Grammy-winning album, The Rising, the title track as well as the all-rocker “Lonesome Day.”
The fourth electric song was the classic “Prove it all Night,” with an inspired closing guitar solo.
As is customary on The Rising Tour, Springsteen followed it with two slower, acoustic songs, “Empty Sky” and the emotional “You’re Missing.”
After “Empty Sky,” Springsteen explained the lyric “eye for an eye,” which has been viewed by some fans as a call for revenge. He explained that the line was meant “as an expression of the character’s confusion and grief, never as a call for blind revenge or bloodlust.”
“We’re living in a time when there are real lives on the line,” Springsteen said, “had to make sure that line was clearly understood.”
After the short acoustic set, Springsteen asked the crowd if it was ready to sing, launching into the always fun, “Waitin’ on a Sunny Day,” which for Bruce and the band has become the modern day “Hungry Heart.”
After ending the song on a knee slide, Springsteen and the fans were on an energy high. This concert was truly something special.
“The Boss” then said the next two songs would be for the “old-timers,” and starting with a song off his first album, “Does this Bus Stop at 82nd Street?” and following with “It’s Hard to be a Saint in the City,” with an incredible piano solo by the man on the keys, Roy Bittan.
This was truly one of the highlights of the night, coming to symbolize what Springsteen and E Street Band have done in concert for their 30 years in the business.
After a dragged-out version of “World’s Apart,” the band ripped into the anthem, “ Badlands ,” followed by the first audible of the night, “Out in the Street.” Then came the party-like “Mary’s Place,” complete with band introductions, and then a typical rendition of “Countin’ on a Miracle,” with guitarist Nils Lofgren performing an incredible opening solo for the song.
Springsteen next went to this piano and did a beautiful solo version of “Jersey Girl,” truly a fan highlight of the night. He exchanged vocals back and forth with the audience, providing for a touching moment.
Then came the opening set closer, “Into the Fire,” with an introductory vocal from Springsteen’s wife and bandmate, Patti Scialfa. If there is one complaint I have with the show, her opening vocal would be it.
After returning on stage, Springsteen talked about how he saw his first concert here, and how it was a real “old school place,” mentioning all the bands that played their before, including the Beatles.
When he played one of The Beatles’ classic tunes, “Tell Me Why,” both he and the band absolutely nailed the number, creating one of the best moments ever at a Springsteen concert, by many fans’ account.
“Glory Days” followed, with the band dancing all across the stage, followed by the rock anthem “Born to Run,” the song that broke Springsteen into the mainstream nearly 30 years ago.
The band came back on stage once again, performing the second and final encore of the night. After an emotional “My City of Ruins,” Bruce prompted the audience about the song “Born in the USA ,” saying how he wrote it in 1984 as a prayer for peace, and hoped that he wouldn’t have to write it again (alluding to pressing war with Iraq ).
Soon after, a rocking version of “Dancin’ in the Dark” had every person in the 13,000 seat venue dancing, including a 6-year-old with a sign that read “Tiny Courtney Cox,” an allusion to the video for the song. Springsteen pulled her up on stage, exchanging dance moves with her — another incredible moment.
Just as everyone was ready to head home, or at least to the slot machines, Springsteen declared, “One more for the high rollers” and closed the night with “Roll of the Dice,” a fitting song for Atlantic City.
The nearly 3-hour, 24-song show left Springsteen fans speechless. In what many consider to be the best show of the current tour, which started last summer, the 53-year-old Springsteen proved there isn’t a rock act alive that can touch him.