NEW YORK CITY — Bruce Springsteen and The E Street Band could have a new album out and a concert tour beginning as soon as this summer, according to Little Steven Van Zandt, a longtime member of the group.

Though today’s generation is likely to know Van Zandt from his role on HBO’s The Sopranos or his hit rock and roll radio show, Little Steven’s Underground Garage, he’s also a hardworking guitar player in The E Street Band. 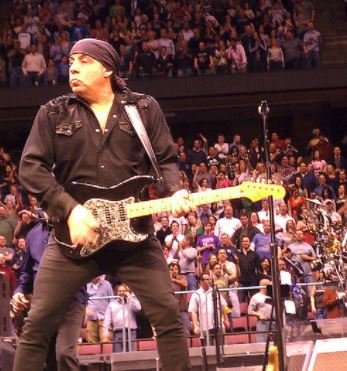 Springsteen hasn’t released a new studio album with The E Street Band since The Rising in 2002, but Van Zandt said it’s not due to a lack of material.

Springsteen “always has a new record,” said Van Zandt, who’s been making music with Springsteen since the two were teenagers on the New Jersey shore.

“He’s the most prolific human being ever,” Van Zandt said about his friend. “It’s actually nauseating. It’s really irritating for a songwriter. He always has an album in his pocket. Always. And it’s always good.”

Van Zandt hinted that Springsteen and The E Street Band could have another new album soon.

You can save and share Tattoo stories by posting them to these and other links. Help us spread them around the Internet!

“We haven’t really talked about it,” said Van Zandt, who said he’s filming The Sopranos until April.

“Summer of ‘07 would be a possibility for me,” he said, if Springsteen calls the group together. “We record very quickly and could have a record out within three months of getting the phone call.”

If The E Street Band goes on tour, said Van Zandt, he’ll continue to do his radio show from the road. An advance crew sets up recording equipment in his hotel room, he said.

Van Zandt said he would speak soon with Springsteen, who just finished a concert tour with The Seeger Sessions Band.