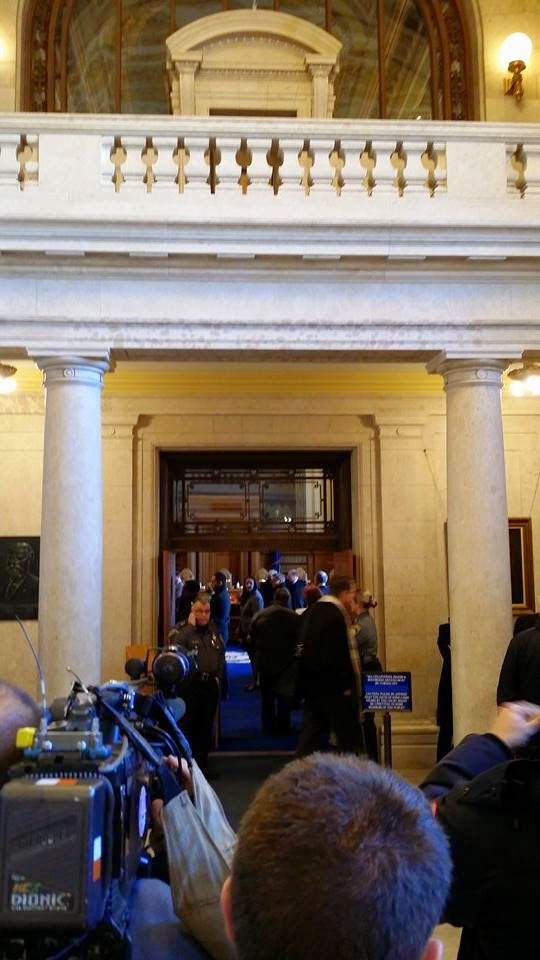 The view of the state Supreme Court courtroom where justices heard the case concerning a 17-year-old Connecticut girl with cancer who sought the right to refuse lifesaving treatment. (Kiernan Majerus-Collins/YJI)
HARTFORD, Connecticut, U.S.A. – A 17-year-old Connecticut girl will continue to receive lifesaving chemotherapy against her wishes, the state Supreme Court ruled Thursday.
The Windsor Locks teen — referred to as Cassandra C. in court documents — sought a legal ruling that would allow her to choose her medical treatment for a deadly cancer against the advice of doctors.

The state Department of Children and Families took custody of the teen after she and her mother refused to follow through on a course of treatment that doctors say would leave Cassandra with an 80 to 85 percent chance of survival.

In a packed courtroom Thursday, Assistant Attorney General John Tucker argued that the state had to step in to save the girl’s life.

The girl is “impetuous and not capable of making this decision,” said Tucker. “If left untreated, she will die.”
Attorneys for the family didn’t dispute the state’s evaluation of the medical prognosis, but argued that the decision to forego treatment belonged to Cassandra.
The family was engaged in “magical thinking,” said Tucker. He said their position was that “the child felt fine now, and that if she felt sick at a future time, she might do chemotherapy then.”
Cassandra “was overshadowed by her mother’s negative feelings about chemotherapy,” Tucker said. “She’s irrationally refusing treatment that’s lifesaving.”
State child protective authorities, Tucker said, had to “be the adult in the room.”
But attorneys for Cassandra argued that the 17-year-old, who has high-risk Hodgkins lymphoma, has the maturity required to make her own medical decisions. They wanted the court to accept the “mature minor doctrine,” which says that certain individuals under the age of 18 have the maturity necessary to make adult decisions.
In many cases, this concept is invoked to give children the right to a medical procedure like abortion that their parents may not be willing to sign off on.
In Cassandra’s case, however, her mother is supportive of her choice to forego treatments that doctors say would be lifesaving.
According to Tucker, Cassandra has said she believes the chemotherapy to be “toxic and poisonous.”
Attorneys for the family focused on the girl’s right to make her own decisions and did not discuss alternative treatments in court Thursday.
Cassandra’s attorneys didn’t dispute the contention that without chemotherapy, the girl will likely die.
If she was 18, a legal adult, she would be able to refuse treatment under most conditions.
The attorneys asked how an 18-year-old is considered to have the ability to totally refuse treatment, while a 17-year-old doesn’t? They argued that the right to refuse treatment – and the maturity necessary to do so – arrives gradually, not all at once.
Tucker framed the case as a question of Cassandra’s maturity, though he was unclear as to whether the state believed any minor possessed the right to refuse treatment.
At one point in the deliberations, Tucker seemed to suggest that Cassandra didn’t fully understand what doctors say would be the impact of stopping her treatment.