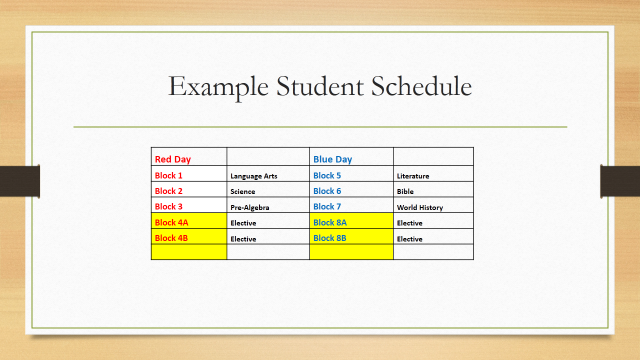 BRISTOL, Connecticut, U.S.A. — Many students aren’t happy about the Board of Education’s plan to bring block scheduling to city high schools next year.
“I think that block scheduling is another attempt at bettering the school system at our expense,” said sophomore Dawn Duprey of Bristol Central High School.
The plan, which would nearly double class lengths, aims to prepare students for college and make it easier for teachers to delve deeper into their subjects.
But students are worried about how teachers can keep classes interested for 84 minutes, when students are off in space after today’s 45- minute periods.
“It’s a stupid idea and I’d probably fall asleep in every in class,” said Central sophomore Julie Forcier.
Under the school board’s plan, the school day will remain the same length, but with only four periods. Because there will be eight classes in all, students will have different schedules on alternating days.
Students currently have seven classes. Adding another period will gradually increase graduation requirements.
The scheme has some supporters.
Bordering on optimism, Central sophomore Nikki Tobacco said, “It’s a good step toward college.”
But, she added, “it’s a bit too early.”
Some students who are in block scheduling this year at Bristol Eastern High School seem to favor the concept as well.
Chris Ashborn, an Eastern sophomore who is on the block scheduling team, said he “thinks it’s great. I enjoy it. Teachers have more time to explain things.”
Ashborn said there is more time to do homework with the extended periods and alternating days.
One group that’s not talking is teachers.
None would comment on the record on the situation, resulting from a virtual gag order placed by the Board of Education. Frequent attempts to get reaction on the record failed.
But one teacher wrote on a chalkboard for his class a hierarchy of decision-making in the Bristol school system. Teachers were at the bottom, with janitors and bathroom monitors above them.
Block scheduling is being tested and enforced in schools around the state, including in a team at Eastern. The results are generally favorable.
Despite pleas from parents, students and teachers, the school board recently voted 9-0 to impose the schedule starting in the fall.
A subsequent compromise for next year, which would have had only one blocked period a day, was struck down.
Whether the results of full-blown block scheduling will quiet critics won’t be clear for years. In the meantime, questions and criticism will linger.