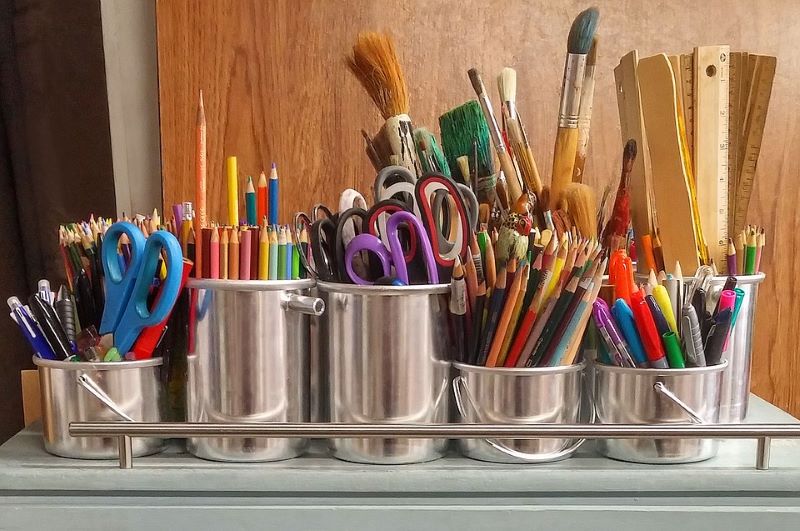 BRISTOL, Connecticut, U.S.A. — Nobody likes to share their crayons. Not even the big kids.

Students at the two city high schools have recently found sharing among the prerequisites
in their elective art classes.

When block scheduling began last fall some local art teachers at Bristol Central High School and Bristol Eastern High School found themselves beginning the year with twice as many students
and the same tight budget.

“We made an impassioned plea based on numbers,” said Barbara Grasso, art liaison to the board of education. “You can’t discount the math.”

After the plea to the board and the two city principals, some increase was granted.

Central Principal Christopher Clouet said he “would feel a lot worse” if the art program didn’t get any more money.

“We do recognize the fact that more students are taking art,” Clouet said.

Still, several teachers say there’s not enough. Some are coping better than others.

“Things have always been tight,” said Terri Riccio, an Eastern art teacher, “but with the block we found that there were not enough tools to go around, and that we were sharing easels, cutting a lot of corners.”

Eastern’s teachers said the block is good for art, allowing more time for projects. It also creates more opportunities to take art classes but leaves a budget that is “not really sufficient.”

“We took into consideration that they use consumable materials,” Clouet said.

According to the teachers, materials are scarce. They are often short of pencils, acrylic paints and developer.

“It would be nice not to sweat supplies,” said Eastern art teacher Wendy Thornley, “and the more advanced classes really make out better.”

Teachers find themselves stretching supplies, like purchasing low-end glaze to meet the budget.

“I’d like to use the better materials for my preliminary classes as well,” said Riccio, “but we have to save somewhere. Teachers spend a lot of their salaries on supplies.”

Students are frustrated, too.

“I take sculpture and we often find ourselves without supplies,” said Monirak Chhun, an Eastern junior, “and that really limits our creativity.”

“When you need something, it’s never there,” Schrieffels said. “and if it is there, it really runs out quickly. Sometimes we don’t have pencils or erasers.”

Although Central has a smaller budget increase and fewer new teachers than Eastern, the teachers don’t seems to be as affected by the money issue.

“The money would be well spent hiring more staff,” said Central art teacher Andrea Blumer. “They did give us some money. We could use more. Need is a relative term.”

Clouet said, “I would like to be able to move it up to four full-time teachers.”

Grasso said that Bristol does comparatively well with art funding, particularly given that some cities get nothing at all.

Still, Grasso said, “They didn’t quite give us what we wanted.”