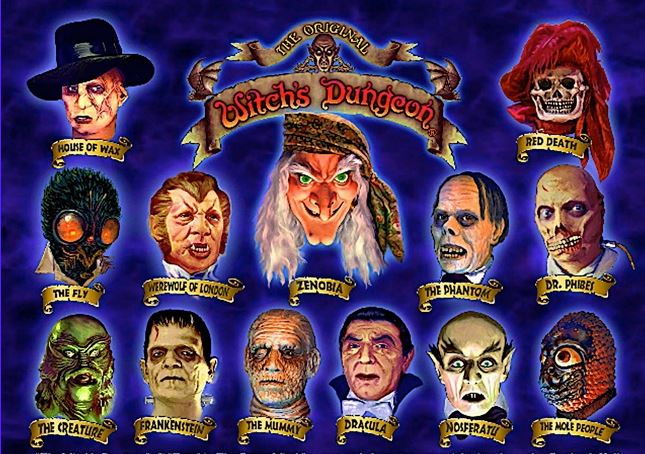 BRISTOL, Connecticut, U.S.A. — Do you think you would be able to sleep under the same roof as mummies, skeletons, and swamp things?

That’s probably not something your average human being would be willing to do.

Then again, Cortlandt Hull, the executive director and creator of Bristol’s own Witch’s Dungeon, is not just some ordinary man.

He’s the artistic curator that has made the classic horror museum stay alive for the past 32 years.

And he doesn’t just live with frightening creatures like the Wicked Witch of the West, the vile, bloodthirsty Nosferatu, and the possessed Reagan of the Exorcist.

He lives to collect, preserve, and share their beautiful wickedness with rest of the world.

And that’s where the Dungeon comes in.

The tiny museum, located on Battle Street, pays tribute to many actors and make-up artists from the most famous spooky flicks of yesteryear.

In 13 intricate sets, Hull has taken scenes from some of his favorite films and turned them into three dimensional still frames.

Frankenstein, the Fly, and the Creature from the Black Lagoon are among those Hull had created to eerily taunt museum guests.

Each section was designed with attention to the smallest details.

In the scene from The Abominable Dr. Phibes, Hull has recreated the costume so well that Vincent Price, the star of the film, commented on how similar it was to the original. Price, a horror movie staple, has donated a number of film artifacts to the Dungeon, including the original costume he wore in House of Wax.

Another example of Hull’s obsession with detail can be found in his Dracula exhibit. The emblem on the vampire’s coffin is a replica of the Dracula family crest used in the original film masterpiece. Hull went to great lengths to make that aspect of the scene exact.

The sets are also accompanied by spine-tingling voice-overs created by several horror film stars. These tracks add to the surreal atmosphere.

The overall effect is dazzling to anyone who can appreciate the great lengths to which the original artists went in order to make their characters truly frightening.

Those who dare may descend into the Witch’s Dungeon on October 23-25, and October 30-November 1.

Don’t forget your crucifix and garlic. And for God’s sake, don’t go when the moon is full and bright!

Amanda Lehmert is a Reporter for Youth Journalism International. Another YJI reporter, Joe Wilbur, contributed to this story.