… is also writing about Hurricane Katrina, but not for The Tattoo.
Amanda’s a terrific staff reporter for The Cape Cod Times, a well-regarded daily in one of our favorite places.
She’s done lots of great work, some of which we’ll need to link sometime, but here’s her latest, about some of the hundreds of thousands who evacuated from New Orleans: After Katrina, a new start.
Amanda remains one of our most stalwart supporters and friends out in that cold, cold world. Here’s a picture of her in July with Tattoo writers Zach Brokenrope and Teague Neal during a Tattoo trip to Cape Cod: 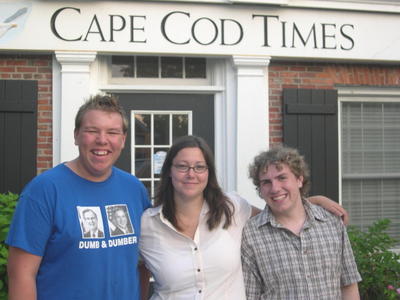 Zach is on the left, Teague on the right. That’s Amanda in the middle.