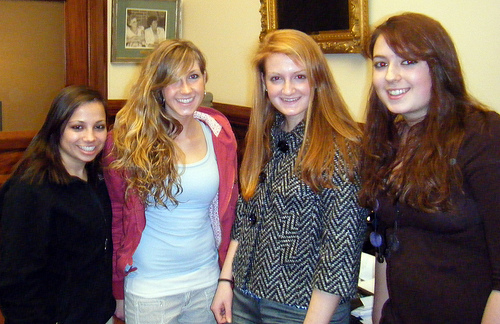 HARTFORD, Connecticut, U.S.A. – Education is the key issue for young people, a group of teens told Congressman John Larson.
The teens, named to Larson’s new youth advisory council, all had something to say about education. Whether they were concerned with it locally or the overall importance of it and how it affects the government.
Some of the Youth Advisory Council members told Larson, an East Hartford Democrat, that education is so critical that their parents actually moved to a specific city so the children could attend school there.
“My family came here because they heard about how great the schools were,” said Carson Collier, a senior at Berlin High School. “But now, everything’s costing more and education isn’t viewed as important. It shouldn’t be that way.” 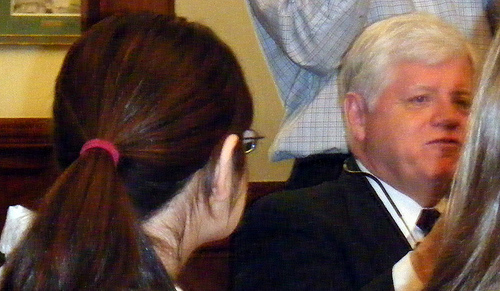 In the council’s initial session with Larson, students bounced ideas off each other and explained the issues within their towns.
“Pulling the arts from schools because they’re excessive is not an option,” said senior Sam Cantor, “because kids will want to go to school less if they can’t do extra-curricular activities.”
In West Hartford, where Cantor is a senior at Hall High School, district officials have constantly considered cutting certain extra-curricular activities, Cantor said.
Saagar Pandit, a senior at South Windsor High School, agreed that after school activities are important.
“The great thing about America is that we not only focus on inside the classroom but out of it,” said Pandit.
Pandit said cutting after school programs would take away from the “unique-ness” of America.
Pandit, who spent time in Anand, India, had a global view of education and how the U.S. can improve and get ahead.
“India is not necessarily better, they just focus more on putting academy first,” said Pandit, who said Indian schools start at the same time as American schools but don’t finish until evening.
“India also has a more rigorous academic curriculum in terms of math and science, which are what you need to succeed today,” Pandit said.
According to Larson, education has a direct impact on America’s ability to compete in a global economy.
“The world is shrinking at a rapid rate and we now have to worry more about international competition,” said Larson.
Larson’s comments about global competition prompted the council to touch on the controversial – and unpopular – issue of lengthening the school days or shortening vacation.
While students in other countries spend more than two-thirds of the year in school, it’s not the same in America.
“We have a measly 182 and we’re going to be dragged behind by them,” said Larson, a former high school history teacher.
The council also discussed how others outside schools should get involved and help children achieve their goals.
In order for education to be a success, they said, everyone has to participate, and parents, educators and the government have to work together.
Angel Dunnham, a senior at Weaver High School in Hartford, said the social service system should be involved to even the playing field.
“There’s a large achievement gap between children that have parents at home and children that don’t,” said Dunnham.
Many students agreed that in order for the government to work, education has to work as well, but they said the problem is that without the proper structure, that will never happen.
“We can make policies ‘til the cows come home, but it won’t make any difference because people won’t know what to do with them,” said Dunnham.
Saagar summed up the council’s ideal system.
“I think what would be most efficient is lengthening the school day. This way we would have more class time and less homework so we could participate in after-school activities,” Pandit said. “We could get ahead where we should be.”